SPANISH transport minister Mr Rafael Catala has confirmed in a radio broadcast that excessive speed is believed to be a factor in the derailment of a Madrid – Ferrol service 4km south of Santiago de Compostela on July 24, which killed 78 people. 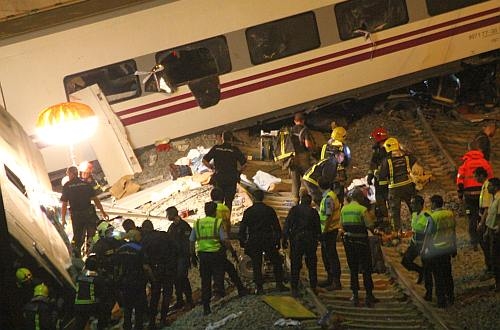 Police are waiting to question the hospitalised driver, who is under formal investigation, and the train event recorder has now been recovered from the wreckage for analysis.

The accident occurred in the transition section between ETCS Level 1, which is used on the 87km Ourense – Santiago high-speed line over which the train had travelled, and the standard Spanish Asfa system used on the conventional network. Santiago is one of dozens of ETCS-Asfa transition points on the Spanish network.

IRJ has learned from a senior source at Renfe that while ETCS is operable on the Ourense – Santiago high-speed line, class 730 sets of the type involved in the derailment operate exclusively on Asfa on this route despite the fact that they are equipped with ETCS. All other passenger trains operating on this line, including the fleet of class 121 Avant emus, operate on ETCS. The reasons for this have not yet been firmly established.

However, the final ETCS balise on the high-speed line, which is situated 4km from the crash site, would only inform the driver that he is exiting an ETCS section, that all automatic driving modes are disabled, and that manual driving mode is active. This means that if ETCS was in use the accident may still have occurred, and any train could in theory enter the 80km/h section at 200km/h. Drivers of Avant trains brake manually on the section where the accident occurred because the driver interface does not display a braking curve in the transition section between ETCS and Afsa.

The train passed Asfa distant signal E7 4km before the derailment, and E7 150m from the crash site.

Both Asfa and the more advanced Asfa Digital are automatic train protection (ATP) systems, but the latter provides the driver with information on braking curves while standard Asfa only triggers an emergency brake application if a signal has been passed at danger. It is unclear at this stage which version of Asfa is installed on the line.

The operation of both systems is linked to the interlockings but not to speed limits, which must be observed by the driver at all times.

This means that when a route is set on a main line with signals showing a green aspect, no command is triggered onboard the train to adjust the speed. The accident could only have been prevented by the Asfa signal before the curve where the derailment occurred if the following signal, positioned on the approach to Santiago station, was at danger.

The S-bend where the train derailed was intended only as a temporary link between the high-speed line and the conventional network and would have been eliminated by the extension of the high-speed line north towards A Coruña, although these plans have now been deferred.

A second driver was onboard the train, seated in coach 7. In Spain trains normally operate with only one driver in the cab except in the event of an Asfa failure.