PROPOSALS for the reopening of a long-abandoned cross-border railway in the Pyrenees took a step forward on December 1, when Mr Alain Rousset, president of the French region of Nouvelle-Aquitaine, Mr Javier Lambán, president of the Spanish region of Aragon, and Mr Héral Ruijters, director of innovative and sustainable transport for the European Commission (EC), signed a financing agreement for a study into the revival of the Pau - Canfranc line. 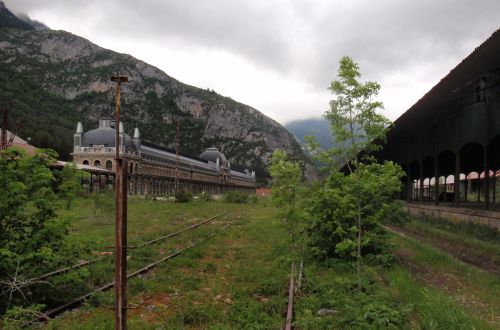 The European Union is providing €7.5m towards the €15m study through the Connecting Europe Facility (CEF) to match the funding committed by French and Spanish stakeholders.

Over the next three years nine studies will be carried out encompassing both the Pau - Canfranc and Canfranc - Zaragoza sections of the route. This will pave the way for a public inquiry “after 2020” and construction is expected to take around three years.

Reopening the line, which crosses the frontier in the 7875m-long Somport Tunnel, is forecast to cost €400-500m.

The line closed as a through route in 1970 after a runaway freight train destroyed the Estanguet bridge near Accous.

Passenger services resumed on the 25km Oloron-Sainte-Marie - Bedous section in 2016.