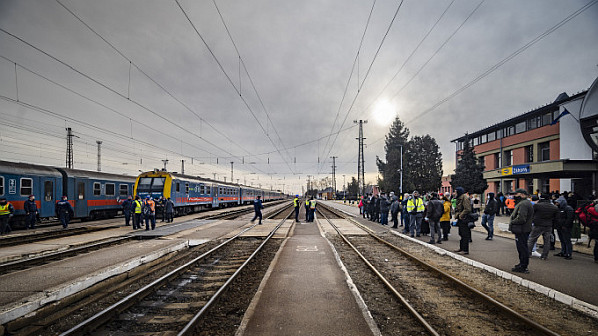 EUROPEAN operators are continuing to offer free train travel for refugees fleeing Ukraine in light of the ongoing Russian invasion.

Ukrainian Railways (UZ) is operating trains for refugees. A transport hub has been set up at Chop station on the border with Hungary, and UZ said it would operate additional trains to Poland.

On February 26, UZ said there was enough rolling stock to be able to transport about 5000 passengers a day from Kiev.

A humanitarian centre has been created at Kiev’s Central station, with two heating points and a field kitchen. 60 volunteers who speak foreign languages are working at the station and seven tonnes of humanitarian products had been delivered to the station by February 28.

PKP Intercity confirmed on February 26 that Ukrainian citizens crossing the border into Poland could travel free in standard class. Ukrainian citizens will be able to travel across Poland by rail for free for the next four weeks. Currently there are direct PKP Intercity trains between Poland and Ukraine and these are being strengthened on the Polish section. Additional staff are also being deployed at Przemyśl station to help manage passenger flows.

On February 26, PKP Intercity sent a train to Ukraine adapted for injured passengers by fitting camp beds. The rest of the train was loaded with products including medical equipment, food and blankets. A similar train operated from the Bohemia region of the Czech Republic on the same day.

Hungarian national operator MÁV-Start announced on February 27 that passengers from Ukraine travelling to destinations within Hungary could do so for free regardless of their citizenship. Additional capacity was also being added to trains operating to the border the operator confirmed. All suitable rooms at Záhony station have been opened to refugees, with MÁV-Start reporting 450 people using them on February 27 and a further 600 waiting. Waiting rooms were kept open at night at Debrecen, Mátészalka, Nyíregyháza and Vásárosnamény.

German Rail (DB) announced on February 27 that refugees with a Ukrainian passport or identity card could use all long-distance trains from Poland to Germany free of charge. DB said it was working with the federal government, the BMDV and federal and state authorities as well as operators in Poland, the Czech Republic and Austria. DB says it is collaborating with Polish operators to prepare any additional capacity which may be required at short notice.

Danish State Railways (DSB) confirmed on February 28 that it all Ukrainian refugees can travel free of charge upon presentation of documents proving that they are residents of Ukraine.

Railway Research Institute (VUZ), which manages the Velim test circuit in the Czech Republic, announced on February 25 that it had decided to terminate trade relations with Russia and Belarus. This followed measures introduced by the Czech government against Russia.

The United States government announced on February 24 that Russian Railways (RZD) was one of 13 companies it was imposing economic sanctions on in in a move to limit Russia’s ability to finance the invasion.

Rail freight from Russia to Europe is continuing to operate. However, UZ has confirmed it has terminated all relations with Russian Railways (RZD) and says it wants to work with the European Union regarding the movement of rail freight from China to Europe.

The Flows website reported on February 25 that freight operator Hupac says intermodal traffic on the China - Russia - Europe route was currently stable . However, given the circumstances, Hupac says future developments cannot be predicted.

Most rail freight tends to operate through Belarus, and so far, these have not been affected by the situation. However, Flows reports that trains operating via Ukraine are likely to be diverted, adding congestion to existing routes.