PASSENGER traffic in the European Union (EU) continued to grow by 1.7% per year between 2009 and 2011, the European Commission (EC) report on the state of the EU rail market shows, although freight traffic has failed to recover to pre-crisis levels. 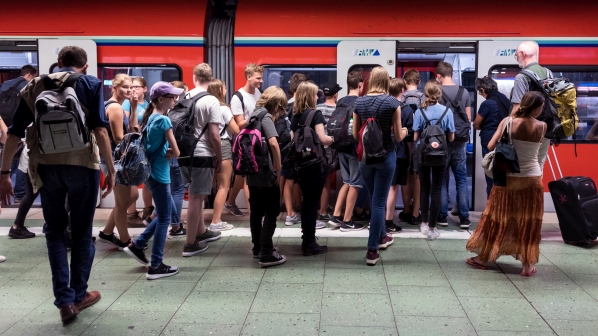 In 2016, EU freight traffic volumes reached 419 billion tonne-km out of 2.5 trillion tonne-km of land transport overall, with around half of all freight crossing borders.

“This lends rail freight a strong European dimension, and makes it even more sensitive to a lack of interoperability and cooperation between national rail networks that can affect its competitiveness,” the report says.

With regards to infrastructure, the total length of the EU rail network in 2016 was around 221,000 line-km, with about 54% of the network electrified. The high-speed network stretched to more than 8400 line-km, having more than doubled in length between 2003 and 2017.

Between 2011 and 2016, the market share of competitors, such as alternative operators to national incumbents, increased in most EU countries. In 2016, open access freight operators competing with national incumbents were active in all countries except Greece, Ireland, Lithuania and Luxembourg, and in half of them the market share of competitors was more than 40%.

In the passenger sector, only half of the member states have competitors operating in the commercial passenger market.

The report shows that at the end of 2016 just over one million people were employed in the European railway sector, although only 21% of the workforce is female. The report also highlights that the ageing of the workforce continues to be a concern, especially for Spain, Greece and Italy, where more than half of the workforce was aged over 50 in 2016.

The report also pointed out that rail has the potential to play a significant role in accelerating the reduction in transport emissions. While rail only accounts for 2% of total EU energy consumption in transport, it carried 11.2% of freight and 6.6% of passengers of all transport modes in 2016. It is also the only mode to have almost continuously reduced CO2 emissions since 1990: by 2016, it represented only 0.5% of overall transport CO2 emissions.