SPAIN's Ministry of Transport this week confirmed a 20% increase in ridership on Renfe's AVE high-speed services during 2013, which saw passenger numbers swell to 14.5 million passengers, fuelled by the introduction of a flexible fares fare policy and the opening of two new high-speed lines during the fiscal year. 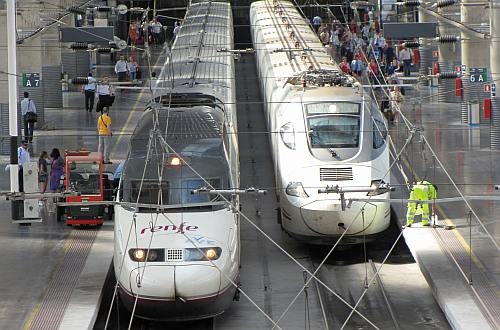 The 11% reduction in all tourist class fares introduced by Renfe in early February 2013 is seen as the main driver for the unprecedented ridership rise, along with more flexibility in return tickets and new 10-trip AVE passes.

The Spanish national train operator also fed its 200-unit high-speed train fleet with an undisclosed increase in the proportion of tickets sold under yield management principles, with discounts ranging from 30% to 70% off the normal fare.

Services on the Madrid – Barcelona high-speed line carried four out of 10 AVE passengers, while the direct service between the two cities registered 3.1 million passengers, thus retaining more than 50% of the rail-air market on this route.

Long-distance ridership, which includes not only AVE high-speed services but also the gauge-changing Alvia routes, reached 25 million for the first time in Renfe's history following a 13.6% increase in passenger numbers.

Two high-speed lines were opened the last year, one connecting Barcelona with Figueres and the French border in January and the other linking from June the popular tourist destination of Alicante with Madrid and the rest of the high-speed network, which is the world's third largest. No comparable passenger statistics for these lines have been published by the ministry.

As a consequence of the rise in the AVE ridership, ticket revenues rose accordingly. Although no official figures have been released yet, Renfe forecasted last October that it would close 2013 with a 2% increase in ticket revenues from the overall long-distance sector and 4.5% for AVE.