THE INITIAL phase of test running in the first completed section of the Gotthard Base Tunnel has concluded successfully, paving the way for the start of test operation through the entire length of the 57km tunnel next year. 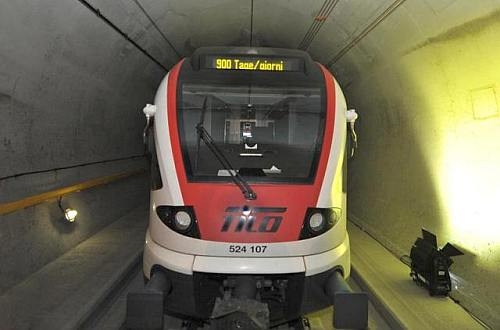 More than 650 test runs operating at speeds of up to 220km/h have been carried out over 78 days on the 13km section between the southern portal at Bodio and the multifunctional station inside the tunnel at Faido. The tests were carried out by AlpTransit Gotthard (ATG) using rolling stock and personnel provided by Swiss Federal Railways (SBB).

ATG is now analysing the data in preparation for the beginning of full trial runs through the entire length of both the north and southbound tunnels, which are scheduled to begin in autumn 2015.

The tunnel, which is the longest in the world, will be handed over to SBB on June 2 2016 and full commercial operations will begin in December 2016.

"We are very pleased with the results of the various measurements we have made, which confirm that the entire tunnel system is working as expected," says Mr Oliver Bratschi, head of commissioning at ATG. "The complex interfaces between procedures and systems including track, catenary, power supply, signalling, tunnel technology, safety, security and communications functioned without any significant deviations or abnormalities."