€21m rebuild for the line, which closed in December 2018 for safety reasons. 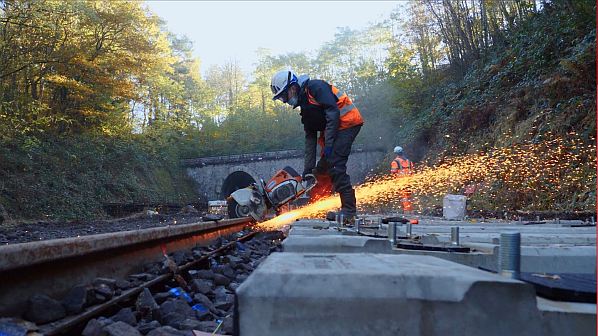 TRAINS resumed operating on the Epinal - Saint-Dié-des-Vosges line in France after three years of repairs to the railway after operation was suspended in December 2018 for safety reasons.

€21m has been spent on rehabilitating the line, with funds provided by the French state and Grand Est Region. The restart of passenger operations was marked by a ceremony attended by French prime minister, Mr Jean Castex, minister for transport, Mr Jean-Baptise Djebbari, president of the Grand Est region, Mr Jean Rottner, and chairman and CEO of French National Railways (SNCF) Mr Jean-Pierre Farandou.

Following the suspension of services, Grand Est Region and SNCF Réseau signed an agreement on July 1 2019 to renovate the line between Arches and Saint-Dié-des-Vosges. SNCF says this section included important heritage engineering structures. The section is part of the 49km, single-track, unelectrified Strasbourg - Epinal line.

SNCF says the first phase of the “most urgent” work will be complete by the end of 2021. This includes the regeneration of the Vanémont and Bruyères tunnels; a complete renewal of 7.7km of track and ballast, rail and sleeper replacements; and the renewal of six grade crossings.

Once the Vanémont tunnel works were complete, the main works on the line were conducted from mid-2020 onwards.

Longer-term, the Grand Est Region aims to offer journeys of less than an hour between Épinal and Saint-Dié-des-Vosges. The re-opened line is an integral part of the call for tenders underway for a contract to operate the Bruche - Piedmont - Vosges line.