FOLLOWING the resignation of the entire board of Italian State Railways (FS) on November 26, Italy's Ministry of Economy and Finance, in agreement with the Ministry of Infrastructure and Transport appointed a new board on November 27, which will remain in place until at least 2017. 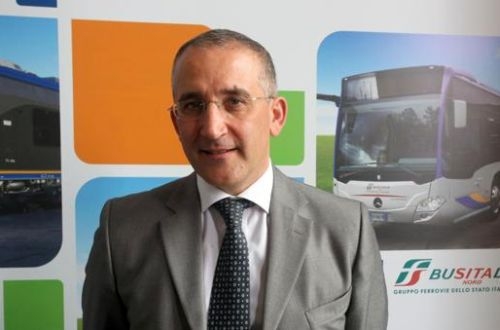 The new president of FS group is Mrs Gioia Ghezzi, while Mr Renato Mazzoncini has been appointed CEO of the company with a broad operating remit. Mazzoncini, who has been CEO of FS bus subsidiary Busitalia since 2012, is charged with managing the privatisation of a 40% stake in FS, having been involved in the privatisation of Florence public bus company ATAF, which was taken over by Busitalia itself. The sale of ATAF took place when Italy's current prime minister Mr Matteo Renzi was mayor of Florence.

A graduate in electrical engineering from Milan Polytechnic, Mazzoncini was previously CEO of bus company Autoguidovie (part of Ranza Group), where he started a joint venture with Transdev, before being selected to head Busitalia by the then CEO of FS Mr Mauro Moretti. During his tenure at Busitalia Mazzoncini signed a joint venture agreement with Autoguidovie to create a company to bid for bus contracts in central and northern Italy, with a particular focus on integrating bus and train services.

Other members of the new board include Mrs Daniela Carosio, Mr Giuliano Frosini, Mrs Simonetta Giordani, Mr Federico Lovadina, and Mrs Wanda Ternau, all of whom were members of the former board.