FRENCH National Railways (SNCF) has released details of its plans to more than triple the size of Gare du Nord, Paris’ busiest station, by 2023 in time for the Olympic Games which will be staged in the French capital in 2024. 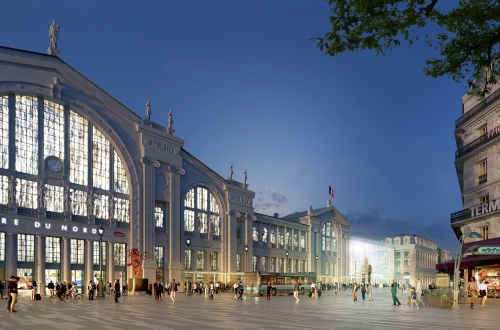 The extension will open in time for the 2024 Olympic games.

The design of the station, which is expected to accommodate more than 800,000 people per day in 2024, and 900,000 people by 2030 compared with around 700,000 today, is being led by architect Denis Valode. SNCF and property developer Ceetrus are negotiating a contract, which is due to be finalised by the end of 2018, which will see the creation of a joint venture owned 34% by SNCF Stations & Connections and 66% by Ceetrus to carry out the expansion and operate the station over a period of 35 to 46 years.

The area of the station will triple, expanding from 36,000m2 to 110,000m2 by 2024. A large new concourse will allow arrival and departure flows to be directed to two different areas, while passenger circulation areas will more than double from 15,000m2 to more than 37,000m2. SNCF says a further expansion of the Eurostar terminal will also facilitate customs control to meet the challenges of reinforced border controls due to Brexit.

SNCF says the project will also support new shops and services in and around the station, with cultural activities, 5500m2 of co-working space, a nursery and new restaurants. It will also feature a 1km running track on the station roof, a new sports facility, a basketball court and a golf course.

To meet environmental standards, the rebuilt station will feature 715m2 of green spaces and 3200 photovoltaic solar energy panels, while levels four and five will be made of wood.

The latest announcement follows plans presented in June 2015 which included restoration of the existing buildings dating back to the 1860s and significant expansion of the space available for Eurostar services to London, with new mezzanine waiting areas above the tracks and a new business class lounge in space formerly used as a hotel. The first phase was due to be completed by 2018 as part of improvements totalling €500m being undertaken by SNCF at other major Paris stations.