GERMANY’s railways continued to see growth in terms of revenue and traffic during 2017 according to the latest annual Railway Market Analysis from the Federal Networks Agency (BNetzA), which was published this week. 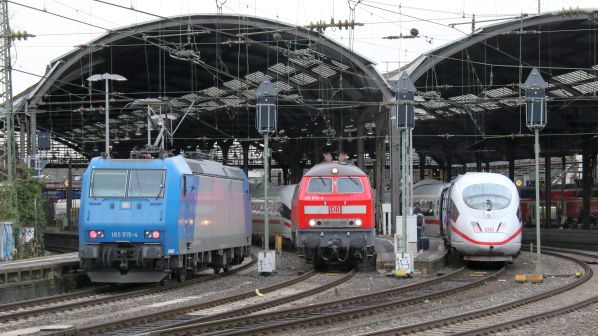 The BNetzA is responsible for ensuring there is a competitive rail market in Germany and achieves this in part through an annual detailed survey covering a wide variety of companies operating trains, infrastructure and support services.

For the 2018 report - which covers the performance of the network in 2017 - more than 2000 companies were surveyed. The survey primarily covers train operators and logistics firms but excludes equipment suppliers, freight customers, and regional and state transport authorities.

The results show the range of different players in the German rail market, with 319 active train operators including 153 passenger and 168 freight companies.

Of the 124 regional passenger operators, 59 are privately-owned while 14 are owned by non-German state railways. The remainder are owned by national or regional governments. A total of 29 companies are active in the long-distance passenger sector, including charter train operators.

On the freight side, 94 privately-owned operators are active in the market with a further 23 companies owned by non-German state railways.

Although most of the railway system is managed by DB Network, Germany has a total of 138 rail infrastructure managers and more than 500 companies are active in providing specialist services to the wider industry.

The report shows that both traffic and revenue grew for both train operators and infrastructure managers during 2017. Total turnover from rail operations increased to €20.7bn, including

€10.8bn for regional passenger, €4.2bn for long-distance passenger and €5.7bn for freight. Infrastructure managers reported increased turnover of €6.4bn, including €5.1bn from access charges, €900m from station usage fees and €400m from other sources.

German Rail’s (DB) competitors gained very little ground on the incumbent in 2017. DB Cargo’s share of the rail freight market declined slightly, falling from 54% to 53%, but it remained the dominant player in the regional passenger (74%) and long-distance (more than 99%) markets.

The rail freight market remained broadly flat in total tonnage terms but performance increased 2.3% to 129 billion tonne-km. However, growth in the overall freight market meant rail’s market share declined from 19.6% to 19.3%. This can be partially attributed to the three month closure of the main north - south freight route along the Rhine valley following the Rastatt Tunnel collapse in August 2017.

Figures comparing freight revenue with tonnage carried show that income per tonne-km remains at 2014 levels at 0.043 per tonne km.

Whilst the dominant mode of passenger transport in Germany remains the private car (83.6% of journeys) rail has increased its share marginally at the expense of car and long distance bus usage progressively from 8.1% in 2014 to 8.4% in 2017.

Yet despite this increase, over half the train operators reported experiencing serious difficulties recruiting qualified personnel, especially drivers. This situation has worsened in recent months with regional passenger operators across Germany cancelling services due to driver shortages.

The combined effects of staff shortages - increasing payroll costs and increased track access charges levied by the dominant infrastructure provider (DB Network) resulted in only 71% of passenger and 86% of freight operators reporting an operating profit during 2017.

Infrastructure charges accounted for 40% of passenger operators’ total costs and 25% for freight operators.