BRITAIN’s secretary of state for Transport Mr Chris Grayling has reaffirmed the government’s commitment to rail enhancements and resilience measures in South West England amid heightening concern among politicians in the region over a lack of clear action on the issue. 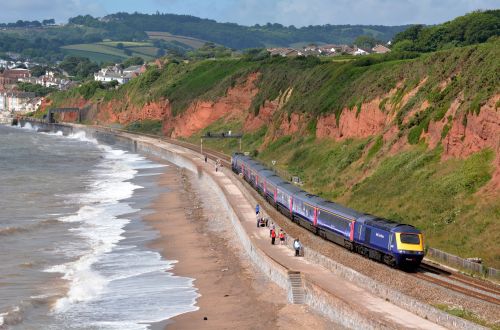 The vulnerability of the sea wall at Dawlish, which was badly damaged in a storm in 2014, is causing concern among politicians in South West England.
Photo Credit: Keith Barrow

Member of Parliament for Plymouth Mr Jonny Mercer had threatened to table an amendment to vote down the Hybrid Bill on High Speed 2 Phase 2a (West Midlands - Crewe) unless the government gave “concrete commitments” to act on the findings of a Peninsula Rail Task Force (PRTF) report submitted to the Department of Transport (DfT) in November 2016 (PDF link).

On January 30, Grayling wrote a letter to Mercer confirming that the DfT will set out its response to the PRTF report next month, and that finding a long-term solution to address the vulnerability of the coastal section of the Exeter - Plymouth line through Dawlish is the “number one national priority” for his department. Grayling has he has asked infrastructure manager Network Rail to deliver a “planned solution as quickly as practical,” with the aim of beginning work “quickly after the completion of the development phase.”

In the letter, Grayling confirms the DfT will review the costs and business case for the first part of the Speed to the West proposals, including electrification and track realignment on part of the Exeter - Plymouth line, and, subject to due diligence, integrate this into planned track renewals between Totnes and Plymouth.

Grayling also says the DfT has instructed Great Western Railway (GWR) to prepare plans for the introduction of regular passenger services on the Exeter - Okehampton line with the aim of “delivering an all-week, all-year service as soon as reasonable practicable.”