IRJ has put together a great line-up of speakers for its International Railway Summit being staged in association with IRITS Events in Vienna on February 17-19 2016. The main theme of the event is the future of rail transport. 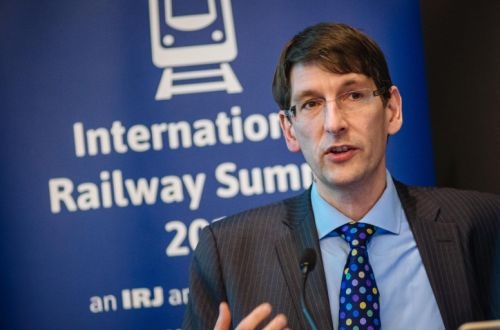 Mr Christian Kern, CEO of Austrian Federal Railways (ÖBB), will be the guest speaker at the pre-conference dinner on February 17. This will be followed on February 18 by keynote presentations from Mr Alain Flausch, secretary general of the International Association of Public Transport (UITP), who will talk about the UITP's project to boost public transport usage in cities. Mr Andy Doherty, chairman of the European Rail Research Advisory Council (Errac), will give a progress report on the Shift2Rail railway research programme which is now getting underway, while Ms Maria Leenen, CEO of SCI Verkehr, will present her predictions for the railway market.

In addition, there will be presentations on the latest developments in track technology, an examination of whether railways are getting the most out of big data, and a technical session on innovative technology. This will be followed by an on-track demonstration of a Linsinger rail milling train.
The first session on February 19 will be devoted to the Fourth Railway Package which is now entering a crucial phase. Mr Josef Doppelbauer, executive director of the European Railway Agency (ERA), will explain how the Fourth Railway Package will streamline the certification of new trains in Europe while opening up the market to competition.

Dipl-Ing Günter Steinbauer, CEO of Vienna's public transport operator Wiener Lienen, and Mr Giuseppe Atoma, chairman of the UITP design panel, will be keynote speakers at the Urban Rail session on February 19. A second look at technical innovations will be followed by a session on procurement. Speakers will include Mr Ichiro Takahashi from JR East who talk about the internationalisation of procurement, and Mr Philippe Citroën, director general of the European Rail Industry Association (Unife), who will outline progress being made with the Japan-Europe trade agreement.

In addition, a technical visit is planned on the afternoon of February 17 to see Vienna's impressive main station which has just been completed.

International Railway Summit also offers delegates the opportunity to arrange one-to-one meetings between buyers and suppliers. The Lounge on the IRITS website enables delegates to select companies or individuals they would like to arrange meetings with during the event.