RAIL leaders will be among the speakers at the next International Railway Summit being organised jointly by IRJ and IRITS Events in association with the International Union of Railways (UIC). The event will be held at the UIC headquarters in Paris on February 15-17 2017. 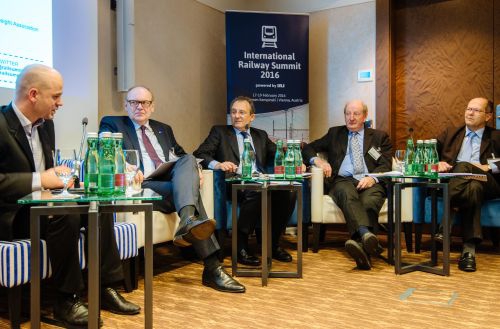 Mr Jean-Pierre Loubinoux, director general of the UIC, will be the opening speaker during the first session on February 16 on the future of rail together with Mr Guillaume Pepy, president of French National Railway (SNCF) and Mr Josef Doppelbauer, executive director of the EU Agency for Railways. Mr Khalid Al-Olayan and Dr Ramiz Al Assar with the Gulf Cooperation Council Secretariat General will provide an update on the Gulf Railway project.

The first afternoon sessions will consider whether regional passenger rail has a future and speakers will include Mr Michel Quidort from the French rail users association (FNAUT), Mr Jeremy Long from MTR which currently operates services in Britain and Sweden, and Dr Eric Forster from Austria’s open-access operator Westbahn.

Is Shift2Rail a game changer for rail? will be the final topic of the day and speakers will include Mr Carlo Borghini, executive director of the Shift2Rail joint undertaking, Mr Pierre Izard, chief technical officer with SNCF, and Prof Andy Doherty, Network Rail’s chief rail technology officer.

The title of the opening session on February 17 is: Do autonomous driving and Uber pose a threat to urban rail? The keynote speakers will be Mr Alain Flausch, secretary general of the International Public Transport Association (UITP), Mr Franck Avice, Group Executive Board Member of Paris Transport Authority (RATP) and Mr Gareth Powell, Director of Strategy and Contracted Services with Transport for London. Mr Christophe Sapet, chairman of Navya, will talk about the introduction of the first autonomous-driving buses.

The afternoon sessions on February 17 will consider whether current train designs are fit for the 21st century and whether the digital railway will be the game changer that people expect. There will also be two technology sessions during the event looking at the latest railway innovations.

A site visit is being organised by RATP to the maintenance facility for the new Line 9 metro train fleet on the afternoon of February 15, which will be followed by the conference dinner. More information on International Railway Summit is available on the IRITS website.