IRJ at Fourth Railway Forum, Berlin: GERMAN Rail (DB) CEO Dr Rüdiger Grube outlined his company's digitisation strategy, Mobility 4.0, telling delegates at this week's conference that it was important DB took the lead on this or risk falling behind its competitors. 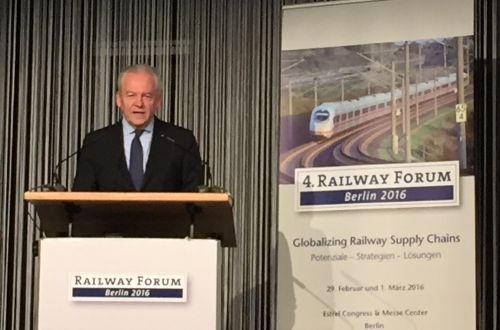 "Digital forces us to question everything we already do," he said. "It also opens up new worlds to us.

"We have to question what our customers want and we are constantly looking at other industries to see what they are doing. For example, online booking now has a huge hold over the hotel industry and is now effectively setting prices. My biggest nightmare is for another mobile platform to redirect our customers to other IT platforms which are very customer-friendly and over time could dictate how we run our services. It is crucial that we provide this mobile service so we decide our own fate and that the decisions are taken by our company."

Grube says that every DB sector or company is using digitisation in some form and that the railway is currently working on 260 digitisation projects in 60 topic clusters, with work taking place in six digitisation laboratories. Among the projects highlighted by Grube during his speech was the use of 3D printing, which he said "was no longer a vision but a reality," with test printing of 50 components taking place last summer, 20 of which have been approved for use in service.

"It can take 1.5 years to get approval for the right spare part, and this is why 3D printing is a great solution," Grube said. "For components like a hook to hang your jacket on the train, or the handle to open a window, things that wear out easily, we can have a 3D printer on site to produce the components as when you need them. This can lower the cost of production by 50%."

As for an ongoing digitisation project, the rollout of WiFi on DB's trains, Grube admitted that progress had been slower than he had hoped. While all first-class ICE coaches were fitted with WiFi by the end of 2014, the extension to second class will now be completed this year.

Grube said the issues DB has faced are because it remains dependent on third party communications providers and that it may not always be in their interest to serve the rail network. He said that Germany's transport minister Mr Alexander Dobrindt is planning to invite service providers to discuss the issues at a roundtable this month.

"We are also hoping to extend this to our trans-regional trains in 2016 so we will have 5200km of track equipped with WiFi," Grube says. "The goal is to rollout on the complete DB network by 2018."

Grube said that his hope is digitisation can lead to greater efficiency in the rail industry, which can help DB achieve its punctuality targets, whether this is through rolling out automated trains on main lines, as he hinted Korea is planning to do for the 2018 Winter Olympic Games, or introducing smart sensors which can monitor the condition of components or infrastructure, or the possibilities afforded by 5G or 6G telecommunications.

Grube said that initiatives such as the DB Talent Factory, which challenges young people to come up with ideas for apps to improve the service offered by DB, is one way which the railway is contributing to achieving these goals. He also said the DB's open data portal is available for entrepreneurs to use as leverage to develop new ideas.

Indeed, drawing on the comments of Facebook founder Mr Mark Zuckerberg, who said that Berlin is the leading place for start ups in Europe, Grube said that he hopes that German industry, which is already in a strong position, can be the driving force behind the digital world driving the railway of tomorrow.

"Speed is decisive for competition and delivering what we need, but we say if the customer is not going to be OK with it, please refrain from developing this and focus on something else," Grube said. "We also think that done is better than partially done, but 80% is sufficient for a prototype. At this point we can start doing and start working together to come up with good results."