FOLLOWING a public tender, Hungary's Györ-Sopron-Ebenfurth Railway (GySEV) has awarded a Forints 11.4bn ($US 51.3m) contract to electrify the 87km Mosonszolnok – Porpác line in western Hungary, which will enable the operation of electric services between Hegyeshalom and Szombathely. 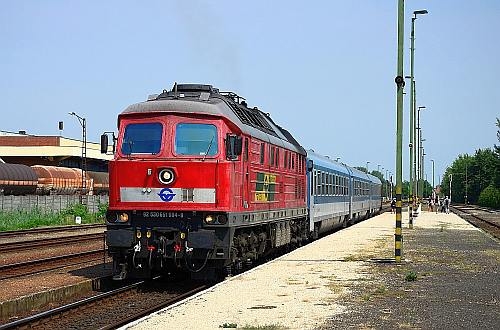 The project is due to be completed in August 2015 and will be implemented in two phases. The first phase will involve electrifying the line from from Csorna to Porpác, which will allow Budapest – Szombathely InterCity services to switch to electric traction. These trains are currently diesel-hauled between Csorna and Szombathely, utilising diesel locomotives leased from other operators.

The second phase will see the rebuilding of the Csorna – Mosonszolnok line. As part of the works, stations will be rebuilt with 55cm-high platforms and new lighting. Central traffic control will be installed and a number of turnouts equipped with electric heating systems.

The Rajka – Szombathely line is intensively used by transit traffic from Slovakia and beyond to Croatia and Bosnia, primarily carrying iron ore or freight destined for the Adriatic ports. In a separate project, which has not yet been tendered, GySEV will also electrify the remaining 49km of the line that it manages south of Szombathely, towards the Croatian border at Gyékényes/Koprivnica, by August 2015.

This could also allow through operation of electric traction from Rajka to Hodos, the border with Slovenia, albeit with a reversal at Zalaszentiván. However, the remaining 53km from Zalaszentiván south to Nagykanizsa, is owned by Hungarian State Railways (MÁV) and there are no immediate plans to electrify this section or hand it over to GySEV.