IRJ at Infrarail, London: Sir Peter Hendy, chairman of Network Rail (NR), outlined some of his thinking for the future of Britain infrastructure manager to Infrarail delegates. 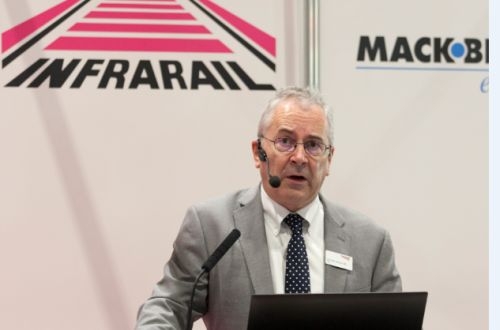 Hendy confirmed that he agreed with one of the key recommendations of the recent Shaw report that more power should be given to NR's regional divisions, known as routes within NR. "We believe decentralising NR is the right thing to do, " Hendy said.

He also indicated that he is keen to bring NR s costs under control. "Because of the way NR was financed before, it didn't really matter - the debt just went up. " However, Hendy acknowledged that the increasing frequency of extreme weather events coupled with the primitive construction techniques used in the 19th century is having a serious impact on the railway - NR is currently repairing two serious landslides and a collapsed sea wall near Folkestone. "Landslides are now big events, partly due to rotten engineering - some of the railway was constructed in a shoddy way in the past," Hendy said. "We need good engineering, innovation and measuring to make the cost of repairs acceptable. "

Hendy confirmed that NR plans asset sales to boost its investment budget. "We intend to sell as much of our property portfolio as we can, but not at any price, to invest in increasing railway capacity. "

The NR chairman recognises that changing operating practices will also be necessary to boost capacity. For example having drivers waiting at the ends of platforms at London termini stations would cut turnaround times for trains significantly. "We can't afford to have trains occupying platforms for 15-20 minutes," Hendy said.

Hendy added that he has changed his mind about selling railway expertise abroad since he transferred from Transport for London to NR. "I found a flourishing consultancy business when I joined NR. There is scope for sending our engineers abroad, but we have to be careful that we don't neglect the day job."