HS2 Ltd, the company responsible for developing a high-speed network linking London with Birmingham and northern England, has revealed revised proposals for the redevelopment of Euston station, the site chosen as the location for HS2's central London terminus. 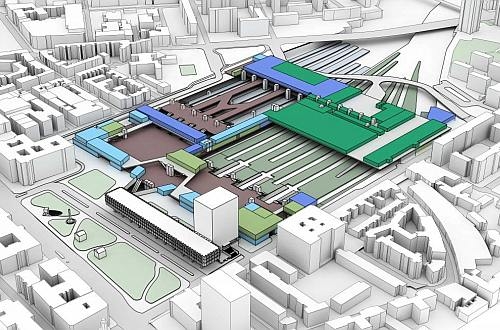 In January 2012 the government unveiled plans for the initial phase of HS2 from London to Birmingham, which included extensive reconstruction of the existing station at Euston, which is Britain's sixth busiest. The controversial proposals for Euston would have required extensive demolition and the rebuilding of all 18 existing platforms, and according to HS2 Ltd, disruption to passengers would have continued for more than a decade.

Under the revised plan, platforms 1-15 will be retained, with the exception of platforms 9 and 10, which will be removed to allow adjacent platforms to be lengthened. There will be 11 new platforms for high-speed services, constructed alongside the existing platforms. The original proposals envisaged 14 platforms for conventional services and 10 high-speed platforms.

HS2 Ltd says there will still be opportunities for residential and business development above the station, and that the revised proposals will provide all the capacity required to accommodate high-speed and conventional services. There will also be a redeveloped concourse and a new sub-surface pedestrian link between Euston and Euston Square Underground station.

The revised option will be included in the draft environmental statement for the first phase of HS2, which will be published within the next few months. This will be subject to further public consultation later this year before a decision is made on whether to adopt the proposals as part of the forthcoming hybrid bill. The work is due to be completed as part of the first phase of HS2, which will open in 2026.

Last month Lords Bradshaw and Berkeley submitted an alternative proposal for Euston to the secretary of state for transport Mr Patrick McLoughlin, which involves constructing a new tunnel from Queen's Park, west of the new HS2 station at Old Oak Common, to serve an underground high-speed station between the existing Euston and St Pancras stations. This would be a through station, allowing services to run onto HS1 to serve destinations in mainland Europe while also giving connecting southeast and eastern England a direct high-speed link to the midlands and the north.

Under the proposal, suburban services into Euston would also be diverted onto the Crossrail link between Paddington and Liverpool Street, providing towns on the West Coast Main Line with more direct links to central London and the city's business districts while also freeing up capacity at Euston.

The lords argue that the so-called 'Euston Cross' proposal would also reduce the land take for the project and obviate much of the demolition currently proposed in the Camden area.