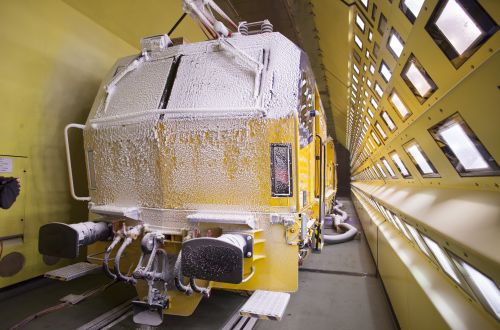 The HTW 100 E³ electrification vehicle is equipped with three battery modules, which are charged via a generator by a 480kW diesel engine and regenerative braking system during travel. When it arrives at the worksite, the vehicle can operate in battery mode, reducing noise and emissions.

The lithium-ion battery system is designed for two six-hour shifts and can be expanded with additional modules if required.

To ensure reliable operation in cold weather and a long service life, Plasser has worked with Kreisel Electric, Austria, to develop a thermal management system for the HTW 100 E³.

The nine batteries are fitted with more than 200 sensors which constantly monitor their temperature. The thermal management system ensures heat pumps maintain the temperature in each module at 25-35oC, the optimal level for operation.

Testing at the RTA facility measured not only extremes of temperature but also different forms of precipitation, with a wind generator to simulate varying speeds of travel. The tests also looked at diesel preheating times at low operating temperatures.

The vehicle was equipped with 20 additional sensors prior to testing, a process which took three days to complete. Testing to simulate the predefined scenarios took four days.