PLANS for International Railway Summit 2015, IRJ's first conference being staged in Barcelona next month in cooperation with IRITS, are now being finalised with an impressive line-up of senior figures from the railway industry agreeing to take part at the event. 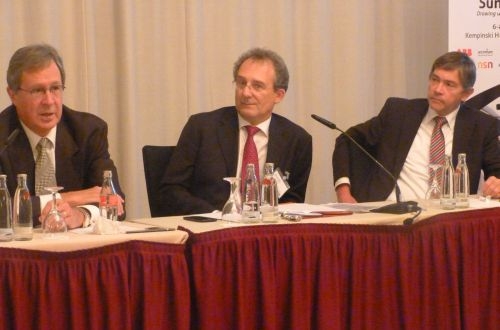 The conference will open on February 19 with keynote presentations on two of the railway industry's most topical initiatives. Dr Libor Lochmann, executive director of the CER, will outline the implications of the European Union's fourth railway package while Mr Philippe Citröen, director general of Unife, will bring delegates up-to-date with the Shift2Rail research project. They will be joined in a panel discussion by Mr Chris Carr, head of the European Railway Agency's safety unit.

Mr Giuseppe Attoma, CEO and senior design strategist at Attoma, will start the next session on improving the passenger experience by explaining why it is vital to put people at the centre of designing rail services. The session will also include presentations from Talgo's R&D director, Mr Emilio García, the president of Bombardier, Spain, Mr Alvaro Rengifo, and Hitachi Rail Europe's head of engineering Mr Koji Agatsuma.

The technology session will be followed by a look at the different approaches to procurement strategy in Europe and Japan from both the supplier and the customer's perspective.

The keynote session on increasing urban rail capacity on February 20 will be opened by Mr Pere Calvet, director-general of Catalan Railways (FGC) and UITP vice-president, who will provide an update on the UITP's bold initiative to double or even quadruple the number of people using public transport. Dr Jon Lamonte, CEO of Transport for Greater Manchester, will explain how the city has been able to expand its Metrolink light rail network so quickly.

Mr Iñaki Barrón, the UIC's passenger director, will set the scene for the session on high-speed rail by providing an overview of projects around the world and the challenges they face. Professor Andrea Giuricin, head of studies with NTV in Italy, will talk about the huge obstacles which the world's first open-access high-speed rail operator is trying to overcome.

The afternoon technology session will be followed by a look at how concessioning, franchising and open-access is transforming passenger rail in Europe.

Technical visits are being organised on the afternoon of February 18 to see the huge new station under construction in eastern Barcelona at La Sagrera and the city's new metro Line 9.

The Summit also provides a unique opportunity for buyers and suppliers to arrange meetings to discuss business opportunities. Visit the International Railway Summit website for more information on this exciting event which is being held at Hotel Fairmont Rey Juan Carlos I, Barcelona.