EUROPEAN passenger operators have gradually been increasing services this week as they begin the process of restoring pre-pandemic timetables and adopting social distancing measures. 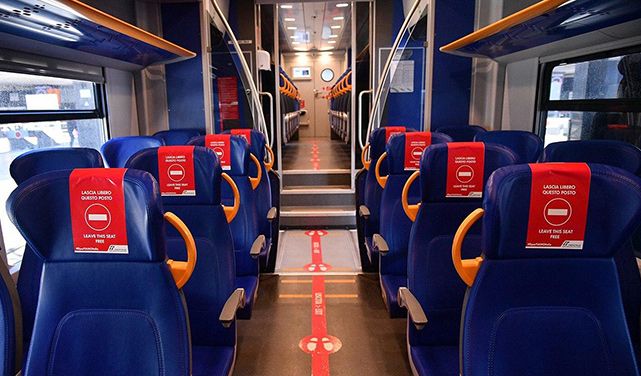 In Italy, one of the earliest countries to scale back rail services, Trenitalia increased the number of regional services available from 2000 to 3800, or 50% of the usual offer, on May 4 as it entered Phase 2 of its response to the pandemic. The operator also added 12 Frecciarossa high-speed services and six InterCity trains between cities across Italy while two further Frecciarossa services between Rome and Venice were added on May 5.

Trenitalia says around 190,000 passengers are using the regional trains, an 8% increase compared with last week, although this is just 13% of the number of passengers before the start of the pandemic. The operator has restricted loadings to 50% of the train’s capacity to meet social distancing requirements. It has also placed markers on seats that should not be occupied, and clear indications on the doors that passengers must use to embark and disembark trains.

Trenitalia’s high-speed competitor NTV is continuing to offer one roundtrip between Rome and Venice per day and is set to maintain this timetable until May 17.

Spanish passenger operator Renfe is set to begin resuming a full commuter timetable on May 11 as it seeks to offer the necessary capacity to support social distancing measures on public transport.

The operator has issued a number of recommendations for using public transport, including maintaining social distancing, wearing a face mask, and only travelling when absolutely necessary. Renfe is set to commence a public information campaign outlining the recommendations in the coming days. Infrastructure manager Adif is also introducing measures to maintain social distancing at stations, including Barcelona Sants, where passengers entering the station are kept separate from those exiting along with metro and car park users.

Portuguese Trains (CP) restored operation of all commuter and regional services on May 4. However, long-distance services are continuing to follow the reduced timetable introduced on April 14.

German regional operator DB Regio was back to operating 90% of regular timetabled services on May 5, the first milestone in its return to full operation. The operator was running on average around two-thirds of its regular timetable during the height of the pandemic.

In the Czech Republic, individual regions are steadily increasing passenger traffic, including full operation on some lines in Pardubice and Olomouc from May 4. Hradac Králové is set to follow on May 11, resuming around 90% of pre-pandemic timetabled services. Reduced timetables will also return in Karlovy Vary from May 15. Prague and the Central Bohemian region resumed full operation on some regional lines on May 1 while Moravian-Silesiam introduced a holiday timetable on May 4. Limitations remain in place in Liberec, Plisen, Usti nad Labem, South Bohemia, South Moravia and Zlin.

Norwegian operator Vy has maintained around 80% of its regular offer throughout the pandemic, and resumed normal operation in eastern Norway on May 4. It also restored several rush hour departures on the Trønderbanen on the same day. Trains between Oslo and Bergen remain reduced compared with the normal schedule while overnight trains between the two cities and Trondheim and Oslo remain suspended.

Polish operator PKP Intercity restored 12 services on May 3 as it began its return to full operation. This is set to be followed by more than 20 trains on May 8 and 9. The operator is only selling half the volume of normal tickets for individual services to maintain social distancing between passengers. It is encouraging passengers to purchase tickets in advance and to make seat reservations so it can continue to adapt its offer depending on demand.

The Netherlands is targeting an increase in the current 15% capacity of public transport services to around 40% from June 1. This in line with the reopening of secondary schools across the country, following an announcement of the easing of restrictions by prime minister Mr Mark Rutte on May 6. Netherlands Railways (NS) and infrastructure manager Prorail are preparing stations to accommodate social distancing of passengers. Transporting bicycles on trains will be prohibited from May 12 and group discounts will be discontinued.