FRENCH National Railways (SNCF) president Mr Guillaume Pepy confirmed on November 19 that an initial internal investigation into the derailment of a test train on TGV Est Phase 2 on November 14, which killed 11 people, has identifed that the accident was caused by excessive speed following a late brake application. 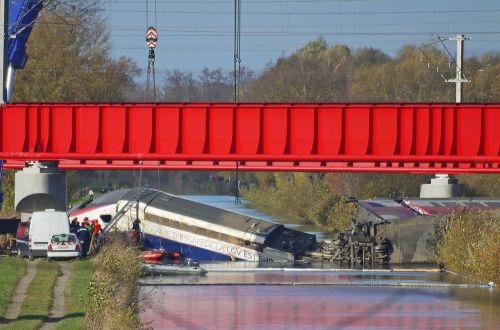 Pepy explained that no abnormalities have been found in the condition and operation of infrastructure and there was no evidence of a technical problem on the train.

The train derailed near the village of Eckwersheim in a transition zone between the high-speed line, which is designed for 320km/h operation, and the junction with the conventional network. The speed limit on this section of track is 160km/h.

The test programme required operation at 10% above the maximum line-speed, equivalent to 352km/h on the high-speed line and 176km/h in the transition zone. According to SNCF's findings, the train entered the transition zone at 265km/h and was travelling at 243km/h when it derailed. SNCF says the brake application should have been made at least 1km earlier.

Testing on the new 106km high-speed line from Baudrecourt to Vendenheim will be suspended until the outcome of the full investigation is known and testing procedures have been adapted to reflect the findings.

A committee of experts led by Mr André Claude Lacoste has been established to investigate the organisational conditions and human factors that may have contributed to the safety failings that led to the accident. The committee will issue its conclusions and recommendations within six months, with an interim report due for publication within three months.

SNCF also says disciplinary actions will also be taken against individuals involved when the investigation permits, but given the seriousness of the accident some staff will face provisional suspension.

The investigation will now seek to establish why children were allowed on board the train - an action described by Pepy as "reckless" - and why seven people were in the driver's cab.

The findings of the initial SNCF investigation have been passed on to the public prosecutor in Strasbourg and the Office of Land Transport Accident Inquiries (BEA-TT), which is responsible for investigating railway accidents in France.
Pepy says the accident "reinforces the commitment to accelerate the implementation of a safety programme at SNCF," and also "confirms the critical importance of human and organisational factors, which we are now focussing on."

"Our customers and everyone in France must, at all times and in all circumstances, be able to have total confidence in the rail system."

The initial report is available in full on the SNCF website (PDF, French text).