THE Planning Court in London has rejected a legal challenge against the construction of Manchester's £85m Ordsall Curve, a key component of the Northern Hub programme of capacity enhancements, which will enable the operation of 700 more trains per day on the railway network in northern England. 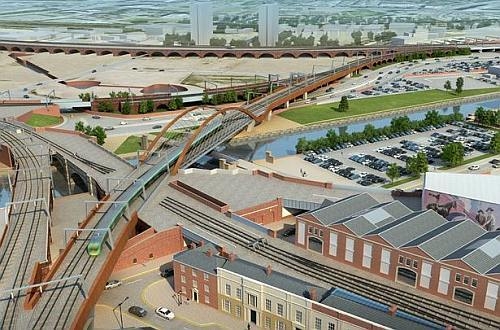 The link between Manchester's Oxford Road and Victoria stations will enable services from Manchester Airport to the northeast to cross the city without reversing at Piccadilly, eliminating conflicts in the congested station throat and enabling the operation of two new fast trains per hour between Victoria and Liverpool.

A Transport and Work's Act Order granting power for construction of the curve was authorised at the end of March, but engineer Mr Mark Whitby - who was formerly a consultant on the project - subsequently mounted a legal challenge against infrastructure manager Network Rail. Whitby opposed the alignment of the curve because it cuts through the site of the former Liverpool Road station, terminus of the world's first inter-city railway, which opened in 1830.

The legal case against the project comprised two statutory challenges to the Transport and Works Act order, one to the Listed Building Consent, and a judicial review of the planning permission. However, the court rejected all three challenges and refused Whitby permission to appeal.