AN investigation is underway in Italy after a Trenord commuter train derailed north of Milan on January 25, killing three passengers and injuring 46. 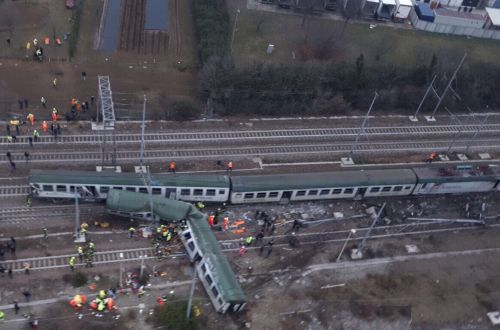 The 05.32 Cremona - Milan Porta Garibaldi derailed at Seggiano di Pioltello at 06.57, 35 minutes before it was due to reach its destination.

The Milan Public Prosecutor’s Office has launched an investigation and the data recorder has been recovered from the locomotive.

Preliminary examinations indicate that the derailment could have been caused by a track defect around 2km from the crash site, where a 23cm-long section of the rail head had been shorn off above a fishplate. Pieces of wood were found between the rail and the ballast at this location, and investigators are looking to establish whether these had used been used by a maintenance team to temporarily support the rail.

In a press release, infrastructure manager Italian Railway Network (RFI) said there was nothing in the company’s maintenance protocols that would call for the use of wooden supports in this location.