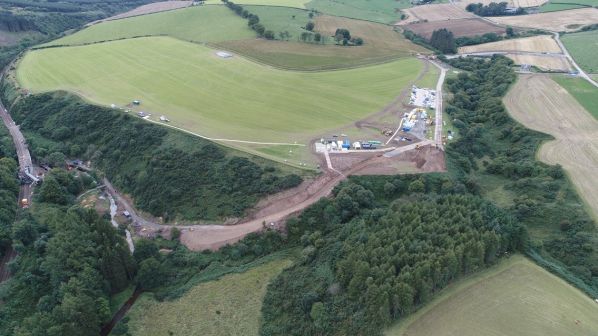 The ScotRail InterCity 7 HST comprising four coaches and two power cars derailed when it hit a landslip on the track.

The work, which began on September 7, will employ the use of a 600-tonne crawler crane to lift the derailed power car and coaches from the line and embankment. The process is expected to be carried out over several days.

NR has already constructed a new 900m road and temporary bridges over surrounding farmland in preparation to transport the specialist lifting equipment.

Plans for the removal of the vehicles were developed in partnership with police, accident investigators and other agencies to enable proper investigation into the incident.

Following the derailment, NR has introduced a range of additional measures, including a precautionary inspection of higher-risk trackside slopes across its network.

In addition, NR has launched two taskforces to improve its approaches to weather monitoring and earthwork maintenance, as part of a long-term strategy in response to climate change.

“While we will now begin the process of recovering the carriages and repairing the railway, we do so with a heavy heart,” says Mr Alex Hynes, managing director of Scotland’s Railway.

“We will continue to work closely with the Rail Accident Investigation Branch (RAIB) throughout this recovery process so we can learn from this terrible event and help prevent similar accidents.”