A ceremony was held on July 23 to mark the entry into service of the first German Rail (DB) class 407 ICE 3 on cross-border services from Frankfurt to Paris. An agreement was also signed to extend shared DB and French National Railways (SNCF) Germany - France cross-border services, which began in 2007, to 2020. 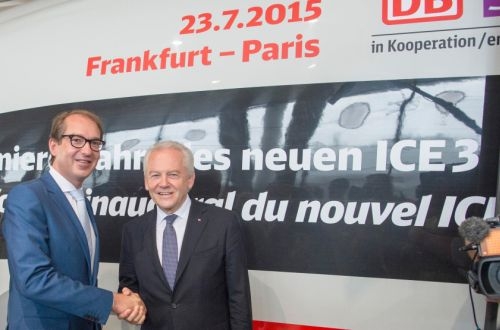 The two CEOs subsequently signed an agreement confirming the continuation of the service for a further five years. Services are set to improve following the opening of the second phase of TGV Est from Baudrecourt to Vendenheim near Strasbourg in 2016. The new line will reduce Strasbourg - Paris journey times by 30 minutes, while a fifth Stuttgart - Paris, and sixth Frankfurt - Paris service, including two trains which will travel via Strasbourg, will be added to the timetable.

"This success has helped to strengthen the links between our two countries, and between our two companies," Pepy says. "We have learned much from each other; from the train attendants who work on both trains, and technicians, to the Franco-German management teams which are steering this partnership."

The class 407s have 444 seats, 31 more than its predecessor the class 406. DB secured French Railway Safety Board (EPSF) authorisation to place in service (SAPS) for the trains on March 31. This covers the operation of eight-car trains on the high-speed and conventional network but does not permit multiple operation.

The new ICE 3 will complement SNCF's fleet of TGV Duplex Euros, which were introduced on these services in 2012.
https://www.railjournal.com/index.php/rolling-stock/velaro-d-and-coradia-lint-gain-french-authorisation.html