REGIONAL rail links between Austria and Italy were stepped up significantly on December 14 with the launch of hourly services on the Fortezza - San Candido – Lienz corridor as part of the Euregio initiative between the Austrian province of Tyrol and the Italian autonomous region of South Tyrol. 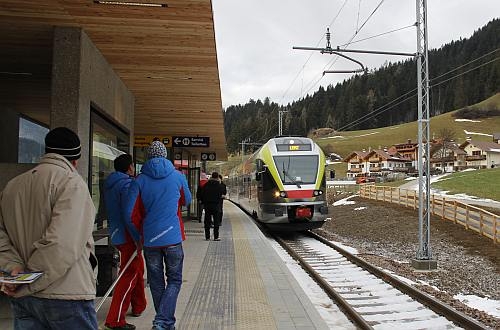 The expansion of services was celebrated with the opening of a new station at Versciaco/Vierschach (pictured), a few kilometres from the border in South Tyrol by Mr Florian Mussner the Italian region's councillor for mobility and his Tyrolean counterpart Mrs Ingrid Felipe. The station has direct access to the popular ski area of Monte Elmo.

With the launch of these services, 33 passenger trains a day now cross the border between South Tyrol and Austria, up from 16 a day in 2012.

Following an inaugural trip on the Bolzano – Innsbruck service, the president of South Tyrol Mr Arno Kompatscher and Mr Günther Platter, president of Tyrol, together with their mobility councillors have presented plans to further develop public transport links between the two regions, referring to ever-closer cooperation on fares and the launch of a new multi-modal ticket for cross-border journeys. Another goal is the launch of direct Trento – Bolzano – Innsbruck services.

South Tyrol's pro-rail policy has generated a steady increase in traffic on many lines, with regional ridership reaching a record 932,862 passengers in October.