NORWEGIAN operator Vy has announced that it will restart regular passenger services on Sweden’s 165km Haparanda Line from April 1, after 29 years. 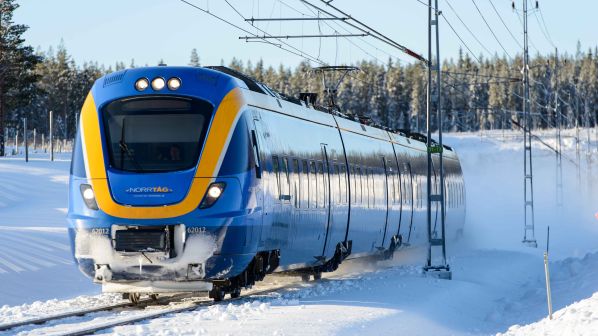 Vy, operating under a contract with Swedish regional transport authority Norrtåg, will initially operate two return trips per day on weekdays, from Luleå, via Boden, to Haparanda, as well as another Umeå - Boden - Haparanda return service.

An alternative timetable will be offered at weekends.

The services will be operated using a pair of Bombardier Regina EMUs with a maximum speed of 200km/h, similar to those used by Norrtåg to operate services between Umeå and Örnsköldsvik.

“We hope and believe that the trains will attract both school and work commuters,” says Mr Joakim Berg, press manager at Norrtåg. “But long-distance visitors who come by plane and night train are just as welcome onboard.”

The Haparanda Line runs from Boden, along the northern coast of the Gulf of Bothnia, to Haparanda on the border with Finland. The line has been freight-only since 1992, following the discontinuation of passenger services.

The reintroduction of passenger services on the line follows the refurbishment of Haparanda station, and the construction of a new station at Kalix, between Haparanda and Boden. The work was carried out by the Swedish Transport Administration (Trafikverket) for a combined cost of SKr 50m ($US 5.82m).

Vy hopes to expand the service to the Finnish municipalities of Rovaniemi and Oulu, following the completion of the planned electrification of the line from Laurila, Finland, via Tornio, to the Swedish border. The plans were announced by the Finnish parliament in June.

“If the railway to Tornio is electrified, we can create fast connections between Luleå and Oulu with a change in Haparanda and travel times of just over three hours,” Berg says. “Oulu is a big city with 200,000 inhabitants and Rovaniemi a major tourist destination.”