CAPACITY on the southern section of the Eidsvoll - Lillehammer - Trondheim Dovre Line was increased significantly on December 1, when Norwegian infrastructure manager Jernbaneverket completed construction of a new 17km double-track section between Langset and Kleverud, which runs alongside Lake Mjøsa. 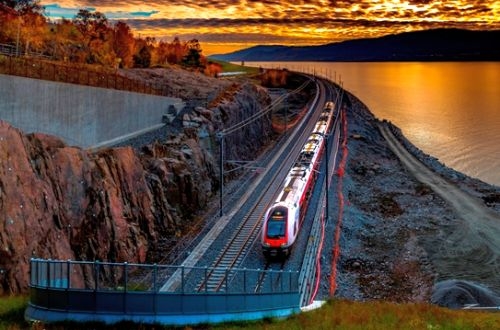 The new line, which replaces a single-track alignment dating from 1880, is designed for 200km/h operation, although trains are initially restricted to 80km/h to bed in the track. The line is equipped with concrete sleepers, 60kg/m rails, electronic interlockings, GSM-R, and a fibre-optic telecommunications network.

Civil works were divided into three sections and Jernbaneverket awarded three contracts for railway systems. Track and catenary was installed by Infranord Norway, while Eltel provided telecommunications and power supplies. The signalling system was supplied by Thales under its framework contract with Jernbaneverket.

The project included the construction of 27 major structures including bridges, tunnels, and retaining walls.

Jernbaneverket implemented the project jointly with Norwegian highways agency NPRA, which has been upgrading the parallel E6 highway with 22km of dual carriageway. The project also involved converting the former single track alignment to a footpath. The total budget for the combined project was NKr 11.7bn ($US 1.34bn), which included NKr 5.3bn for the railway.

Jernbaneverket says the real capacity benefits of the project will only be fully realised when track-doubling is completed on adjoining stretches of this increasingly-congested route, which links Oslo with central Norway. Double-track will be extended north from Kleverud to Tangen and Hamar (47km) and south from Langset to Eidsvoll and Venjar (21km) by 2024. Track-doubling on the Hamar - Lillehammer section is due to be completed by 2030.