THE DUTCH province of South Holland has selected Netherlands Railways (NS) and its German subsidiary Abellio Regio NRW to operate regional passenger services on the electrified line between Gouda – Alphen-aan-den-Rijn. 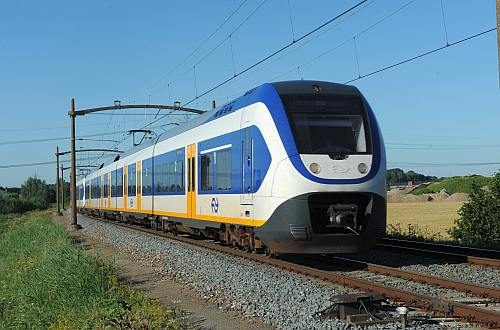 Just one other operator, Arriva Netherlands, submitted a bid for the contract, which is due to be signed early next month and runs for 15 years from December 2016. The deal is worth around €3m per year.

A minimum 30-minute regular-interval service operates on the route, with trains running every 15 minutes before 19.00. Some services operate through to Leiden Central.

Under the terms of the contract the operator is obliged to provide "easily accessible rolling stock" to accommodate passengers with reduced mobility. The concession requires the operator to acquire six new EMUs for the route, and it is anticipated that NS will use new-generation Sprinter Light Train (SLT2) sets. NS is currently consulting with the railway industry on the specification for these trains.

If the new trains are not delivered in time, NS is expected to operate the services with existing SLT class 2400 or 2600 EMUs (pictured) supplied by Siemens and Bombardier.

The line is part of the so called R-net, a new network which is being created with the aim of developing a more coherent public transport system in and around the Randstad conurbation. The project includes infrastructure projects, and the Gouda – Alphen line will benefit from two new stations at Boskoop Snijdelwijk and Waddinxveen Zuid.

This line currently carries around 5000 passengers per day, although ridership is expected to increase with the opening of the new stations.