NETHERLANDS Railways (NS) says it is planning to place an order with Stadler for 60 Flirt EMUs to provide additional capacity in its regional train fleet before the delivery of Civity EMUs from CAF from 2018 onwards. 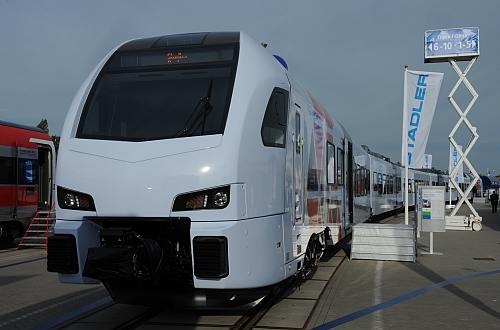 NS expects to finalise the contract with Stadler soon and deliveries are expected to start in 2016 with the aim of introducing the first trains by December. Details of the specification have not yet been disclosed.

NS has an urgent short-term requirement for additional rolling stock. The start of the new core network concession at the end of 2015 will impose tougher performance criteria on NS, while passenger numbers are also increasing rapidly, thanks in part to the introduction of a new student travel card which has brought a significant rise in student rail travel in the Netherlands.

Another challenge will be the reduction in availability of the existing fleet of Bombardier/Siemens Sprinter Light Trains (SLTs) as trains are taken out of service for the installation of ETCS onboard equipment.

CAF confirmed on December 5 that it has signed a contract with NS for 118 Civity EMUs (pictured below) in a deal worth more than €500m.

NS has also shortlisted four suppliers for its Intercity New Generation (ICNG) project which will be an important element of its High Frequency Rail Programme and for integrating the operation of the Amsterdam – Rotterdam – Belgian border high-speed line into the main network following the collapse of Fyra. The trains are due to enter service from 2021 onwards.