OSTRAVA has become the first city in the Czech Republic to gain a dedicated airport rail link with the inauguration of a new connection to Leoš Janáček International Airport on April 13. 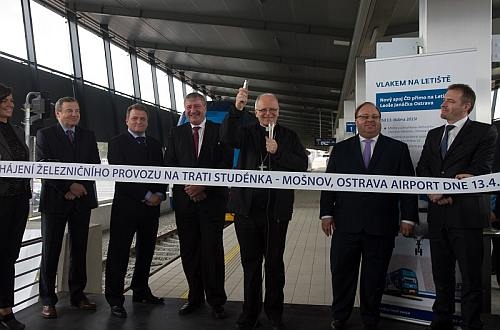 The project involved upgrading and electrifying the 5.6km line from Studénka on the Ostrava – Prague line to Sedlnice and the construction of a new 2.9km extension to the airport.

Czech Railways (CD) operates the route as an extension of Ostrava Line S2 with 10 return services per day between Monday and Saturday and nine trains on Sundays, calling at Ostrava Svivnov and Ostrava Hlvaní Nádraži, and Bohumin with a journey time of 30 minutes.

Services are operated by CD class 471 CityElefant double-deck EMUs, although these will be replaced in December by new class 650 RegioPanter EMUs. CD has ordered 11 of these two-car trains from Škoda Transportation for the service and the first set was delivered last month.

The opening of the line coincides with the Ice Hockey World Championships, which will begin in Ostrava on May 1.

As well as passenger trains, the line will be used by freight traffic serving a new intermodal terminal near the airport.

Leoš Janáček is the Czech Republic's third-largest airport and was used by 298,000 passengers last year.