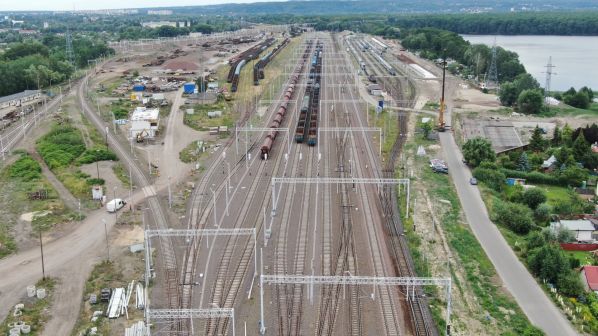 POLISH infrastructure manager PKP PLK has announced it is undertaking a Zlotys 1.5bn ($US 324.3m) project to upgrade the lines to the ports of Szczecin and Świnoujście in northern Poland to increase capacity to cope with growing freight traffic.

The project is co-funded with up to Zloty 510m from the European Union’s Connecting Europe Facility (CEF), and will allow 750m-long trains with an axleload of 22.5 tonnes to access the ports. It will also increase capacity at freight yards speeding up and improving the efficiency of wagon processing.

“Projects implemented by PKP PLK, which improve rail access to West Pomeranian sea ports, increase their potential and contribute to the development of the country’s economy,” says secretary of state at the Ministry of Infrastructure, Mr Andrzej Bittel. “Thanks to the use of funds from the CEF, environmentally friendly rail transport is becoming even safer and more competitive with road transport on national and international routes.”

The track layout at Szczecin Port Central station has been modified for greater efficiency, and work is progressing to build embankments, yards and internal access roads. A new central control room will oversee five signalling districts, with the facility to house a new maintenance and diagnostics centre.

A central control centre is also being built at Świnoujście for three signalling districts.

PKP PLK has also announced plans to upgrade the line from Szczecin Główny station to the German border, including laying a second track along single-track sections of the route.

Databout has been awarded a Zlotys 9m contract to undertake design work for the project. Construction is due to begin in 2024, and will be completed by the end of 2025.

“In addition to improving the rail connection between Szczecin and Berlin, the planned investment will also increase the accessibility of the railway in the Szczecin agglomeration,” says PKP PLK director for infrastructure maintenance, Mr Piotr Majerczak. “A new station in Kołbaskowo and three stops will be built, thanks to which the inhabitants will gain access to the most environmentally friendly means of public transport, the railway.”

Under an agreement between PKP PLK and DB Network to upgrade the Berlin - Szczecin line, the section from Szczecin Gumieńce to the border section will be electrified and resignalled. This will increase line speeds to 160km/h for passenger services and 120km/h for freight trains.