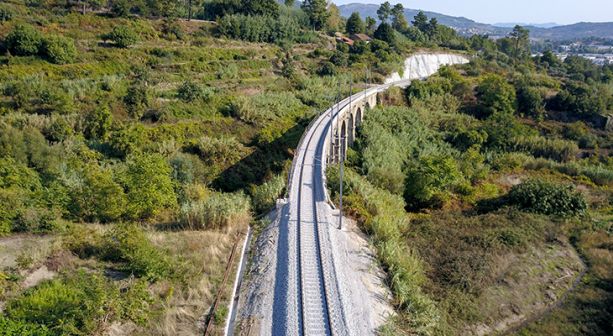 PASSENGER services resumed on the Covilhã - Guarda section of Portugal’s Beira Baixa Line for the first time since 2009 on May 2 following the completion of a €77m renovation project.

Work comprised electrification of the 46km line as well as infrastructure upgrades on 36km, including rehabilitation of six bridges, updates to stations at Maçainhas, Benespera and Barracão, automation of 18 level crossings and the removal of one level crossing, and installation of ETCS Level 2 and GSM-R. Infrastructure Portugal (IP) had completed upgrades to 10km of track prior to the start of the project in 2018.

The project also included the construction of a 1500km chord at Galegos to connect with the Beira Alta line, including a 237.8m bridge across the River Diz, which enables Beira Baixa Line trains to continue on the Beira Alta Line to Vilar Formoso on the Spanish border avoiding the need to reverse at Guarda. Trains between Covilhã and Guarda take 46 minutes, serving five intermediate stations. Six trains are currently available per day.

EU funding supported €60.6m of the project’s cost with the Portuguese government providing €10.7m. Infrastructure upgrades on the 36km segment were conducted under a €51.9m contract awarded by IP to the Ramalho Rosa Cobetar-Conduril consortium in 2017, with work commencing in September 2018.