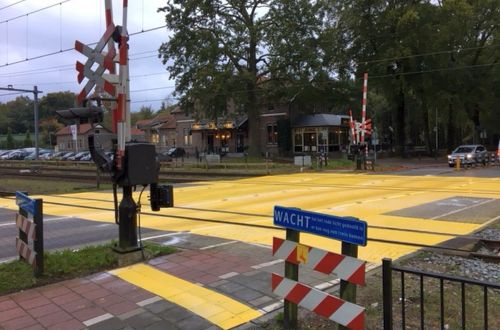 Prorail says the number of near misses at the test site declined significantly after the road surface was painted yellow, while crossing users reported an increased sense of security.

With the success of the six-week trial Prorail is now looking at extending the testing of yellow crossings to other locations on the Dutch network.

Shortly before Prorail announced the findings of its experiment at Baarn, the Dutch Research Council for Safety (OVV) urged rail stakeholders, in particular the state secretary at the Ministry of Infrastructure, to improve the safety management regime for level crossings and work together to quickly reduce the number of crossings on the network.

The council notes that measures taken over the last 15 years have had a positive effect on crossing safety, but it stresses a more ambitious approach is now needed as the rate of progress has slowed. OVV argues that the two separate level crossing safety programmes in the Netherlands should be merged, and it says fragmentation between different stakeholders including Prorail, the ministry, local governments and local road managers must also be addressed to bring the casualty rate down.

Mrs Stientje van Velthoven, state secretary to the Ministry of Infrastructure, says the government will adopt OVV’s findings, and an extra €50m will be allocated to level crossing safety programmes.