BRITAIN’s Rail Accident Investigation Branch (RAIB) has confirmed that the 06.38 southbound service from Aberdeen to Glasgow Queen Street, which derailed near Stonehaven on August 12, did so following a collision with a landslip. 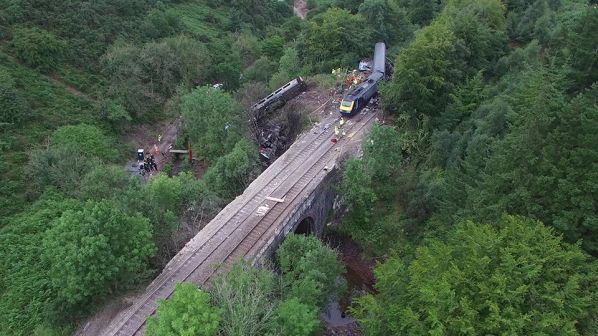 The ScotRail-operated InterCity 7 HST comprising four Mark 3 coaches and two power cars, designated as 1T08, had nine people onboard when it hit the landslip at around 09.40. All coaches subsequently derailed, killing two crew members and one passenger. The remaining six survivors were later taken to hospital.

After departing Stonehaven, RAIB found that 1T08 was instructed to stop by the signaller at Carmont where the signaller instructed the driver to return to Aberdeen following reports from the driver of a northbound train of a landslip between Carmont and Laurencekirk, which had obstructed its progress.

1T08 switched to the northbound line at Carmont and travelled approximately 2.25km north towards Aberdeen before hitting a separate landslip, 6.4km southwest of Stonehaven. The train subsequently derailed, and as the line curved to the right, the train travelled in roughly a straight line for around 91m until it struck a section of a bridge parapet.

The leading power car continued over the bridge and fell from the railway down a wooded embankment along with the third passenger coach. The first and second coaches came to rest on their roofs, with the first lying perpendicular to the track and the second lying on top of it. The fourth coach also lay on the first coach, but remained upright and attached to the rear power car, which was derailed but also upright.

RAIB has confirmed that it is currently collecting evidence to identify the cause and consequences of the accident. This will include an investigation of the sequence of events; the operating procedures; the management of earthworks and drainage in the area; an inspection of the rolling stock, as well as underlying management factors and actions taken in response to previous safety recommendations.

Additional findings, including recommendations to improve future safety, will be published by RAIB following the conclusion of the investigation.

“It’s the job of the RAIB, the UK’s independent rail accident investigation body, to identify the immediate and underlying causes of the accident, and to make safety recommendations to reduce the risk to the UK’s travelling public and rail employees alike,” says Mr Simon French, RAIB’s chief inspector of rail accidents.

“Fatal derailments are a rare occurrence on Britain’s national network. However, landslips and other earthworks failures remain a risk to trains that needs to be constantly managed, and this is becoming even more challenging for the rail industry due to the increasing incidence of extreme weather events.”

Network Rail, the country’s infrastructure manager, has also announced that it will carry out an inspection of high-risk trackside slopes across Britain, following a government request to review its resilience to and management of extreme weather in response to the incident.

In a statement regarding this investigation, ORR expressed their support. “We look forward to receiving the outcome of the review, in addition to plans from Network Rail responding to the requirement we set out last month for improvements to the monitoring of assets and more sophisticated responses to forecast adverse weather.

“There are increasing risks from extreme weather which are well known in the industry and our recent annual health and safety report showed that there have been six-times more flooding events and a trebling of earthworks failures on Britain’s railways in the last year.”