THE members of RB Rail, the multi-national joint venture between Estonia, Latvia and Lithuania established to implement the Rail Baltica (RB) project, have launched the procurement of detailed technical designs for seven of the 11 sections making up the project, covering 57% of the network, it was announced on January 23. 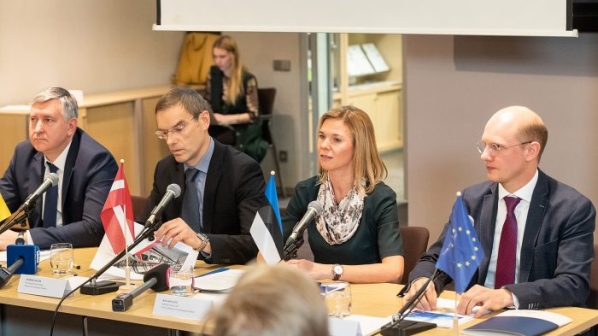 During a press conference in Tallinn, RB Rail joint venture (JV) acting CEO and chairperson of the management board, Mr Ignas Degutis, Rail Baltic Estonia CEO, Ms Riia Sillave, European Railway Lines (EDL) board member, Mr Andris Linužs, and Lithuanian Railways (LG) director of Rail Baltica Coordination Department, Mr Arenijus Jackus, outlined the progress made on the project over the past year and spoke about the plans for 2019.

Under common design guidelines approved in 2018, the line will have an operating speed of 249km/h for passenger operation and 120km/h for freight.

The 870km network, which includes 213km in Estonia, 265km in Latvia and 391km in Lithuania, will be a standard-gauge double-track line electrified at 2x25kV ac and equipped with ERTMS Level 2. Freight trains will have an axleload of 25 tonnes and a maximum length of 1050m.

Finland has been invited to become a shareholder in RB Rail, while Poland has announced plans to investigate increasing the speed on the line from the Lithuanian-Polish border to Elk to match the RB technical parameters.

RB also secured a third Connected Europe Facility (CEF) grant, which brings the funding available until 2023 to €824m, of which 85% is funded by the European Union (EU) while the remaining 15% is funded by the national governments.

A total of 26 contracts were signed in 2018 with a combined value of €1.83m, with 53% of the contracts’ value awarded to Baltic companies.

However, last year was not without its challenges. Ms Baiba Rubesa, the former CEO and chairperson of the management board of RB Rail, tendered her resignation on September 27 2018, effective immediately, citing poor oversight and a different and irreconcilable vision for the project’s management and implementation.

This was followed by the launch of an audit on the management of the internal systems, procurement processes and financing of the project on October 9.

RB Rail says the focus of 2019 is to begin timely delivery of the detailed technical designs, which it says is a precondition for strengthening the project maturity, as well as applying for the next phase of funding to start construction works on the main line by 2021.

It will also launch studies into power supplies, railway maintenance facilities, and safety as well as control, command and signalling. RB will also explore ways to ensure synergy between 1435mm and 1520mm railway networks.