THE German subsidiary of Railroad Development Corporation (RDC), United States, has submitted proposals to DB Networks to take over operation of motor rail services between Niebüll and Westerland on the island of Sylt, which is only connected to the German main land by rail. 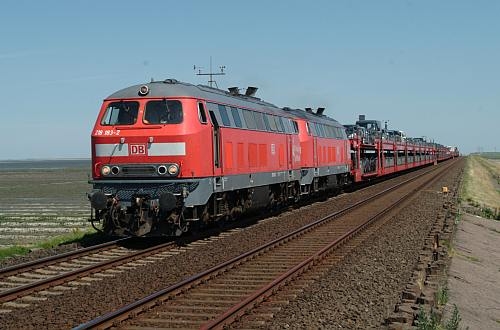 RDC says around 960,000 drivers per year currently use the Autozug SyltShuttle service operated by German Rail (DB) but it claims prices are high and service quality is poor.

The proposal is based on the payment of higher access charges, which would cover the cost of investment in terminals and other infrastructure. RDC says it would increase the number of services by around 50%.

Germany's Federal Network Agency has agreed to a 10-year framework contract for the service and RDC has submitted a track access application to infrastructure manager DB Networks on this basis. It expects to sign a contract by March 2015 with the aim of taking over the service from the start of the 2016 timetable in December 2015.

"The island of Sylt has particular development potential,"says RDC's director for European passenger services Mr Hans Leister. "It can be better organised in close cooperation with the stakeholders on the island and along the coast and we are willing to cover the costs of improved infrastructure, which has been demanded for a long time, through higher access charges."

Sylt is linked to the German mainland by an 11km causeway, the Hindenburgdamm, which opened in 1927. The car shuttles have been operating since 1932.