SPAIN's national train operator Renfe this week announced a major change in its fares policy, with an 11% reduction in all tourist class AVE train tickets and new discounts in an effort push ridership beyond the 22 million mark. 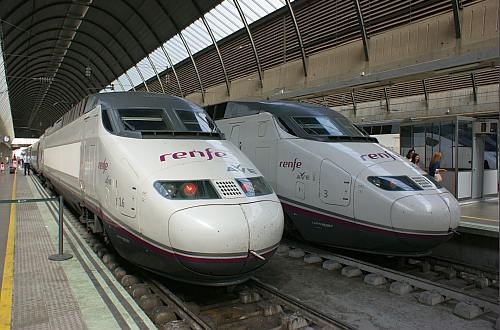 Despite growth of the network to 3000km, and the acquisition of a fleet of more than 200 trains, demand for high-speed rail services in Spain has been hit hard by the recession and the record unemployment, which has reached 26%. High-speed traffic currently stands at just over 4 billion passenger-km per year.

From February 8, all AVE tourist class fares will be slashed and Renfe will increase the number of seats available with prices adjusted under yield management principles, offering a flexible price range between 70% and 30% of the full fare, instead of today's two-tier system which offers discounts in the 30%-40% or 50%-70% ranges.

Renfe has also announced the launch of tourist class passes for 10 trips between any two given cities over a four-month period with a 35% of discount, and a young person's pass for people under 27 years which will offer 30% discounts on any route. The new fares and discounts apply only to AVE trains, while ticket prices on Avant regional high-speed services remain unchanged.

Renfe has also introduced more flexibility in return tickets for all of its services, which will now allow passengers arriving late the possibility to board the next available train with no additional cost, provided there are seats available.