GERMAN infrastructure manager DB Network restored through operation on the Karlsruhe - Basle Rhine Valley Line in the early hours of October 2 following the reconstruction of a section of the line at Rastatt, which was seriously damaged by a landslip on August 12. 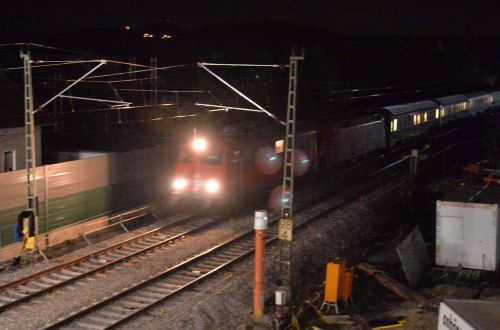 As well as regional and long-distance services, the line is normally used by more than 200 freight trains a day and the collapse at Rastatt has caused huge disruption on this key north-south freight artery, with services diverted or cancelled.

With the reopening of the line freight operators are working quickly to resume normal services and DB says that it has already received bookings for 175 freight paths for October 5.

Replacement bus services carried up to 30,000 passengers a day between Rastatt and Baden Baden.

The collapse was caused by groundwater entering the construction site of the new 4.27km rail tunnel being constructed beneath Rastatt. To stabilise the ground beneath the existing line, 10,500m3 of concrete was pumped into the tunnel, while 540 tonnes of reinforcing steel and concrete slabs with a volume of 3000m3 were installed on the surface. Work on the superstructure was completed on September 25, enabling the installation of overhead catenary.

DB says it has installed sensors at the site of the collapse to monitor ground stability.

Rastatt was a disaster for rail freight. Let's learn the lessons