THE German state of Rhineland-Palatinate and the French Grand Est region have agreed to deepen cross-border cooperation and on June 19 released a joint concept and tender for cross-border regional rail services to start operation in December 2024. 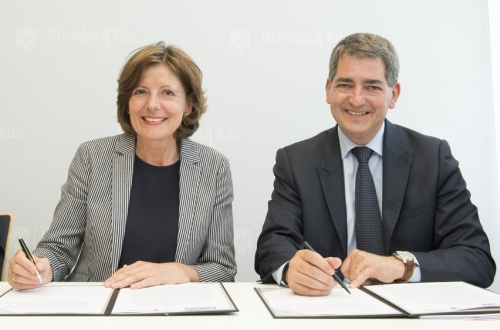 Minister-president of Rhineland-Palatinate, Ms Malu Dreyer, and president of the regional council of Grand Est, Mr Jean Rottner, signed the agreement in Mainz.

Minister-president of Rhineland-Palatinate, Ms Malu Dreyer, and president of the regional council of Grand Est, Mr Jean Rottner, signed a resolution which aims to improve rail transport services from the German region to Strasbourg, France, the first of its kind between a French region and a German state.

Following a study on cross-border services and rolling stock, co-financed by the European Union’s lnterreg VA Upper Rhine programme and regional partners, a tender for the Wörth - Lauterbourg - Strasbourg and (Neustadt) - Winden - Wissembourg - Haguenau - Strasbourg lines was released. The agreement suggested a cross-border version of the Alstom Règiolis EMU could be used on the service.

A report will investigate how the infrastructure between Schweighofen and Haguenau can be improved, which will be combined with the expansion and remedial measures planned for the Vendenheim - Haguenau - Wissembourg section in France.

The two regions are also preparing a timetable for the service and defining rolling stock requirements needed for a coordinated, attractive operation.

"Attractive train connections are essential for us to be able to advance cross-border cooperation in the labour market, education, culture and tourism,” says Dreyer.

"Cross-border mobility is a major challenge for the Grand Est region as well as for our German neighbours,” says Rottner. “This not only facilitates the daily lives of the citizens, but also serves to strengthen our border areas economically.”