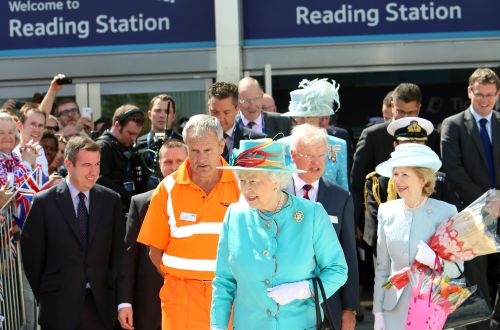 Network Rail says the £895m project has been completed on budget and one year ahead of schedule. The project has involved increasing the number of platforms from 10 to 15, constructing a new footbridge which is three times wider than the one it replaced, providing escalators and lifts to all platforms, constructing new platform canopies, and providing more retail outlets.

The station, on the Great Western Main Line (GWML) to the west of London Paddington, is currently used by nearly 20 million passengers a year, but this is forecast to grow to 30 million a year by 2030.

During the next year the project team will continue work to complete a new viaduct to the west of the station to reduce the number of conflicting train movements, so that trains to Bristol and South Wales will pass over those heading for southwest England and Southampton.

"Brunel's railway is an engineering marvel, but Reading has been a bottleneck on the line almost since the day it was built," says Network Rail's chairman, Mr Richard Parry-Jones. "In a year's time that bottleneck will be gone."

Work to electrify the GWML is already underway and Reading will become the western terminal for Crossrail in 2019.