DB Regio subsidiary S-Bahn Berlin has selected a consortium of Stadler Pankow and Siemens in a framework contract to supply up to 1380 vehicles, with the initial order for 106 trains consisting of 85 four-car and 21 two-car sets. 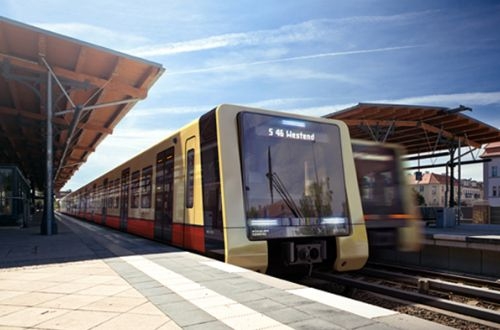 S-Bahn Berlin will deploy the new trains on S-Bahn Ring lines S41 and S42, and on the system's southeastern feeder lines, S47, S46 and S8. These lines comprise approximately a third of the total network and the first 10 trains will be delivered in 2020 with deliveries continuing up to 2023.

"The first 10 vehicles will be pre-production and test vehicles," says Mr Ulf Braker, member of the group executive board of Stadler Pankow. "They will undergo extensive tests before entering regular passenger service, which will enable us to incorporate possible findings from operations in Berlin in the series."

Stadler will be responsible for mechanical and structural aspects of manufacturing including assembling all components. Siemens will supply electrical equipment, including propulsion and braking systems, onboard power supply, vehicle and train control systems, passenger information and bogies. S-Bahn Berlin will carry out maintenance at existing facilities which will be upgraded.

The new trains will feature full-width gangways and air-conditioning, a first for Berlin. There will also be dedicated areas for passengers in wheelchairs directly behind the driver.

S-Bahn Berlin secured the concession to operate the S-Bahn Ring/South East lines for 15 years from 2021 earlier this month. The contract covers the operation of 9.7 million train-km per year with the new trains set to increase capacity by 20%.