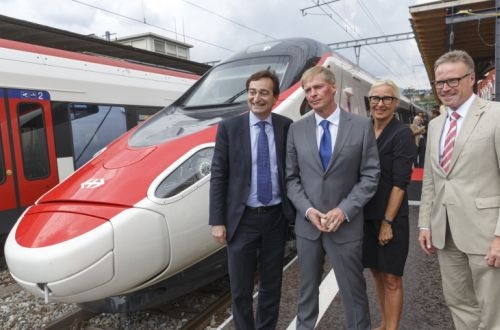 The first of eight ETR 610 tilting trains being supplied by Alstom, which will enter service between Zürich and Milan in December, was named Ticino at a ceremony in Lugano on August 7. At the same, the newly renovated historic part of Lugano station was inaugurated by SBB CEO Mr Andreas Meyer and the mayor of Lugano Mr Marco Borradori. Work started in February on the construction of a new main ticket hall for completion in 2016.

There are also plans to restructure the station at Bellinzona, known as the gateway to Ticino, by 2016 in time for the opening of the Gotthard base tunnel on December 11 2016.

The annual meeting between SBB and local government representatives in Ticino, which took place on the same day, underlined both parties' commitment to the development of local rail services, including the planned expansion of S-Bahn Line S40, which will offer a cross-border connection between Mendrisio and Varese, Italy, from December.