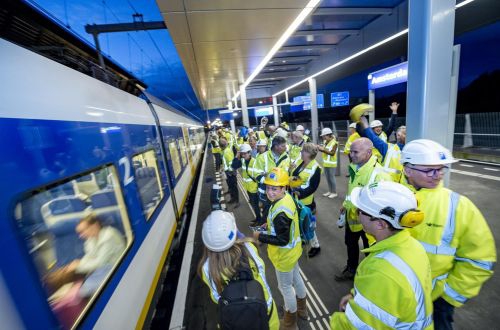 The line is one of the busiest in the Netherlands, passing through the financial district of Amsterdam. During the final phase of the project between July 31 and August 10 the line was closed completely with buses replacing train services.

The 8km line between the junction at Amsterdam Riekerpolder near Schiphol and Duivendrecht the line has been widened from two to four tracks. This involved the construction of 16 new bridges, one of them spanning the River Amstel. The line also crosses the Schinkel canal on a lifting bridge, which will be opened once a night to allow domestic shipping to pass through.

For trains travelling from Schiphol airport towards Amsterdam Central a new flyover has been constructed to carry the line across the railway to Amsterdam South and the A4 highway. Trains travelling to and from both Utrecht and Almere/Hilversum can now run independently of each other instead of waiting for oncoming trains to clear the junction.

Stations have also been modified. To cope with increasing numbers of passengers, platforms at Amsterdam South and Amsterdam RAI have been widened. At Amsterdam RAI an additional platform has been constructed and the station building has been extended for increased passenger flows.

The works south of Amsterdam are part of the OV Saal project, which seeks to massively increase capacity on the Schiphol - Amsterdam - Almere line. Overcrowding has been a problem on this route for some time and with the construction of 60,000 new homes in Almere between 2010 and 2020, pressure on the rail network in the area is increasing.