SCOTTISH transport minister Mr Keith Brown set out the government's plans for the future development of the Scotland's rail network yesterday, pledging a £5bn investment between 2014 and 2019 and reform of the ScotRail franchise. 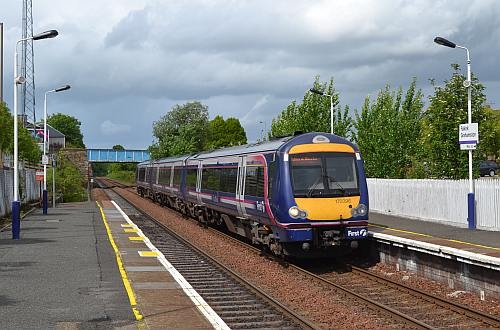 A ScotRail Stirling - Edinburgh service arrives at Falkirk Grahamston. This line will be electrified by 2016.
Photo Credit: Keith Barrow

Major infrastructure investments will include further improvements to the Perth – Inverness Highland Main Line, the first phase of the upgrading of the Aberdeen – Inverness line, and electrification of around 100 route-km per year. Much of the investment will focus on Central Scotland as part of the Edinburgh – Glasgow Improvement Programme, which see the electrification of both lines through Falkirk, as well as the lines to Stirling, Dunblane, and Alloa, by 2016.

The next ScotRail franchise will start in 2014 with a term of 10 years and five-year break-point. During the recent Rail 2014 consultation, ministers had suggested splitting ScotRail into a number of smaller franchises, but widespread public opposition meant the proposals were quickly discarded.

Nonetheless, Caledonian Sleeper services from London to Glasgow, Edinburgh, Fort William, Inverness, and Aberdeen will split from the franchise and will be tendered separately for a period of up to 15 years. According to Brown, creating a separate franchise will generate the best return on the planned £100m investment in the overnight service announced by the British and Scottish governments last year.

The specification for both franchises will be published at the end of the year.

The government will also set up a £30m to fund for strategic freight enhancements, and has allocated £10m to develop future projects.

Other proposals include the introduction of smart card ticketing by the end of the next franchise and the rollout of onboard Wi-Fi by 2019. Transport Scotland and ScotRail recently launched a three-month trial on the Edinburgh – Glasgow route, offering free internet access to passengers on one in 10 services.

Brown told parliament that privatisation had led to too much fragmentation and additional costs, and that the industry has been distracted by internal arguments over responsibility. "We therefore expect the ScotRail franchisee and Network Rail to work together to develop a deeper alliance, a significant step towards industry integration," he says. "The industry should focus on passengers by providing better services, and enhancing resilience and operational effectiveness. We expect this to generate annual savings of up to £30m."

The Scottish government says it is dissatisfied with the current the structure of the industry, and has written to British government ministers on several occasions, most recently in February and May this year, suggesting that services in Scotland could be improved significantly if responsibility for rail services was transferred to the Scottish government. "I am disappointed that they have chosen not to respond," says Brown.