THE Serbian and Croatian governments signed a memorandum of cooperation in Belgrade on March 9 to jointly reconstruct the 412km Belgrade - Zagreb main line. 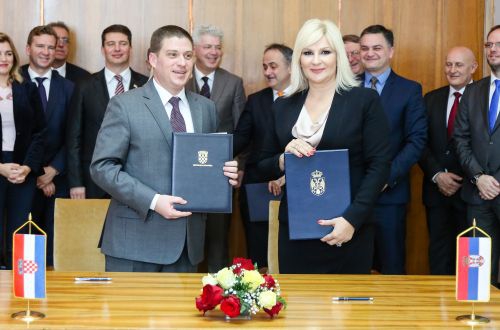 Signing ceremony with the participation of ministers Mihajlović and Butković.

Serbia’s deputy prime minister and minister of construction, transport and infrastructure, Ms Zorana Mihajlović, says project documentation will be ready this year so that work can start in 2019, with a view to completing the upgrade within two to three years.

The objective is to increase the maximum speed to 160km/h which will enable the journey time to be reduced from the current 7h 30min to a little over 3 hours.

Serbia’s minister for European integration, Ms Jadranka Joksimović, says that the two countries will jointly apply for European Union (EU) funding for the project, even though Serbia is not a member of the EU. She says that Croatia, as an EU member, can use the EU cohesion fund and points out that the Belgrade - Zagreb line is on Corridor X of the trans-European transport network.

Croatia’s minister of sea, transport and infrastructure, Mr Oleg Butković, says that some work on the line already been completed with the help of EU funds and that Croatia will need an additional €1bn in EU funding for the remaining work. The Serbian segment of the line is 116km long and will require an investment of around €250m.