Serbia and Montenegro to upgrade Belgrade - Bar line by 2021

SERBIA’s deputy prime minister and minister of civil engineering, transport and infrastructure, Mrs Zorana Mihajlović, has announced that the Serbian section of the line from Belgrade to the Montenegrin port of Bar will be reconstructed by 2021. 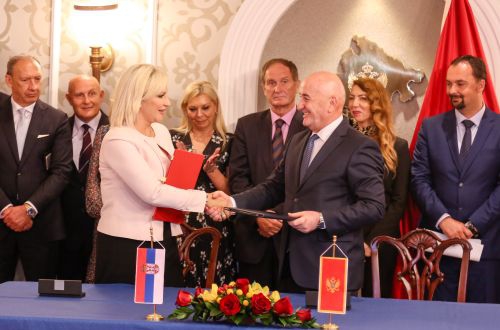 Zorana Mihajlović (left) and Osman Nurković signed an MoU on infrastructure projects at their recent meeting in Montenegro.

Speaking during an official visit to Montenegro, the minister said that Serbia intends to step up work on infrastructure connectivity with Montenegro, both bilateral as well as regional. On the occasion, the two countries signed a Memorandum of Understanding and Cooperation for the implementation of infrastructure projects.

Serbia has already rebuilt the 77.6km Resnik - Valjevo section and Mihajlović says the remaining stretch from Valjevo to the Montenegrin border will be completed by the end of 2020 or early 2021.

However, in addition to infrastructure improvements she also highlighted the importance of cooperation between the two countries on the removal of non-physical barriers, “through the establishment of joint border crossings, such as in Bijelo Polje, because it is unacceptable that freight trains have to wait eight hours or more at the border crossing.”

Her Montenegrin counterpart Mr Osman Nurković said that Montenegro has so far reconstructed more than 40% of the line on its territory and secured €70m in loans and grants for the reconstruction work.