SIX passengers on a Danish State Railways (DSB) Aarhus - Copenhagen inter-city train were killed in the early morning of January 2 when the train was hit by an object while crossing the Great Belt fixed link between Funen and Zealand at around 07.45. 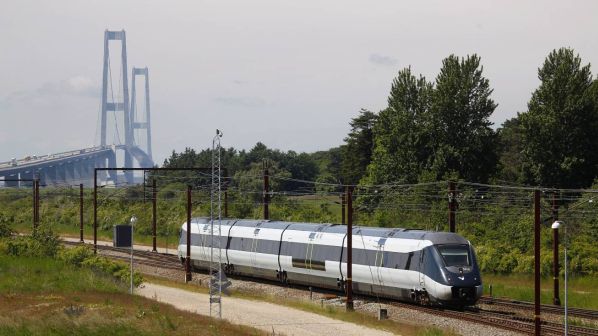 High winds have been cited as the cause of the incident. Reports indicate that a roof from a lorry travelling on a piggyback freight wagon running in the opposite direction on the bridge collided with the train. It is also reported that tarpaulins on five of the lorries on the train were damaged. Denmark’s Accident Investigation Board and DSB’s special investigation department have been assigned to survey the accident site.

DSB says 131 passengers and three railway staff were on board the train, which was operated by two four-car DMUs. 16 passengers were reported as injured on the afternoon of January 2. Rescue workers have set up a crisis centre on Funen island to provide medical and psychological help.

The line over the bridge between Korsør and Nyborg was partially reopened on the morning of January 3, with trains restricted to one track. DSB says InterCity trains are running as normal although passengers should expect delays and cancellations. However, Funen trains are operating only between Odense and Aarhus. Infrastructure manager Banedanmark says catenary was damaged on 500m and 200m sections of the line, which delayed the reopening of the bridge. A shuttle bus service operated between Korsør and Nyborg while the line was closed.

“It is now up to the Accident Investigation Board and the Fyn Police to investigate the damage site and to clarify the cause of the incident,” says DSB CEO Mr Flemming Jensen.

“DSB takes the accident very seriously, and we are deeply affected by both the deaths and injuries. Our thoughts go to the relatives, and we will do everything possible to assist the customers and their relatives. DSB will contribute everything we can to the investigation.”