SLOVENIAN prime minister Mr Miro Cerar and Hungarian minister of foreign affairs and trade Mr Péter Szijjárto attended an inauguration ceremony at the border station of Hodoš on June 10 to mark the completion of a project to modernise and electrify the 109km Pragersko - Hodoš line. 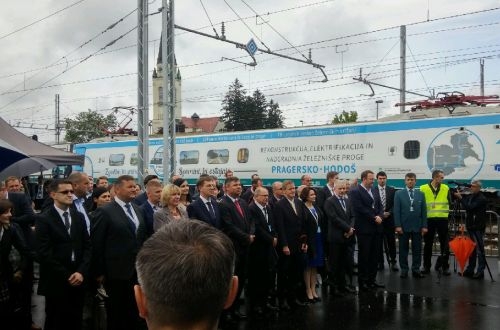 The Pragersko - Hodoš line was the only remaining unelectrified section of Trans-European Corridor 5, which links the Adriatic ports of Trieste, Koper and Rijeka with Budapest and the Hungarian-Ukrainian border.

Work began in 2013 and the project was implemented by a joint venture of Slovenian infrastructure manager SŽ Infrastruktura and principal contractor DRI. In addition to electrification, the project included track reconstruction and realignment, modernisation of stations, and elimination or upgrading of 78 level crossings. Axleloads have been increased and the maximum speed for passenger trains has been raised to 160km/h.

The €465.5m project was financed with the aid of a €207m grant from the European Union Cohesion Fund.