GUILLAUME Pepy, president of French National Railways (SNCF), today marked the completion of 10 years of work when he inaugurated the rebuilt St Lazare station in Paris. With 1600 trains and 450,000 passengers a day, St Lazare is the second busiest station in France. 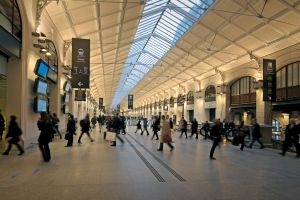 The Euros 250m scheme was a public-private partnership between SNCF, which invested Euros 90m, and Klépierre which provided the remaining Euros 160m. Spie Batignolles was the main contractor for the work.

The project involved excavating 20m below the station, which continued to function throughout the work, to create three new levels beneath the existing two subterranean levels. One of the new levels provides a new interchange with the five metro lines and RER Line E which serve St Lazare. The other two are for car parking. The station also features a 200m-long glass-covered passenger circulation area. Below this there are two levels with 80 shops and restaurants.

St Lazare has been equipped with 300 passenger-information screens, and 21 escalators and lifts.